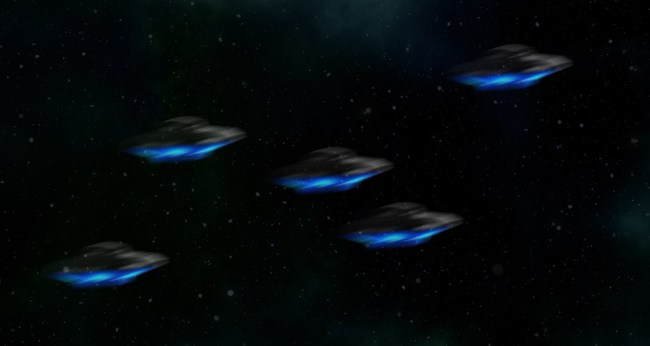 With all of the recent developments surrounding the release of the United States government’s UFO investigation files, along with an ex-Pentagon UFO program astrophysicist admitting that he examined “vehicles not made on this earth,” it’s little wonder that beings from another planet, possibly one or more from the 36 “active” alien civilizations that may be trying to contact us, are becoming more brazen in their reconnaissance.

This latest video was first shared on the Mutual UFO Network (MUFON) by an eyewitness who gave this background information: “Driving in Northeast PA headed northwest at around sunset 8:30pm. Observed unknown flying objects ascending from the horizon.”

The unusual UFO sighting was also recently studied by noted UFO and alien expert Scott Waring, who had this to say on his website…

Now just look at this video, it will blow your mind!

Not one, but five UFOs are seen shooting across the sky during sunset over Laural Run, PA.

The eyewitness was driving and pulled over to record the UFOs.

The objects are entering the earths atmosphere and shooting across the sky! One might be dismissed as a meteor, but five…thats called a squadron of UFOs.

Not so easy to dismiss such things. I’m sure they showed up on military radar, but the US military dismisses them…knowing what they are already.

Many commenters on a video Waring published that further analyzed the images were left gobsmacked by what they saw.

“Wow that’s really cool, they must have been observing something,” commented one viewer.

“Could be space force craft coming back into the atmosphere,” wrote another.

Other suggestions for what was may have been appeared in the video included jet trails, military airlift aircraft, and space debris falling to Earth.

Whatever it was, as long as people like the person who took the video and experts like Waring continue to push and investigate, sooner or later we’ll know the truth, because…