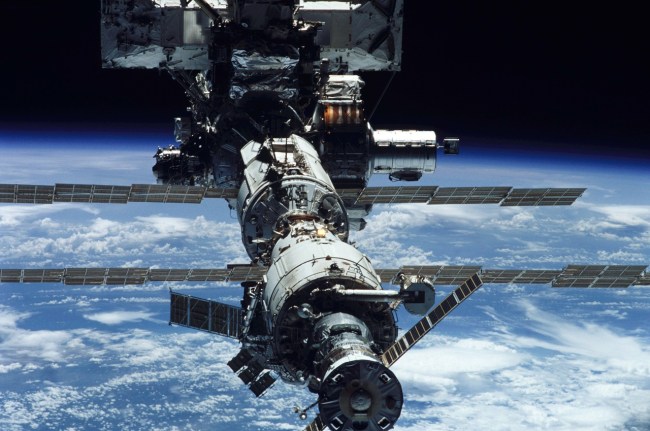 In 1961, Russian astronaut Yuri Gagarin threw down the gauntlet when he became the first human being to go into outer space and consequently sparked an international dick-measuring contest that climaxed when Neil Armstrong dunked on the Soviet Union and hung on the rim with his crotch in its face when he stepped onto the Moon in 1969.

That metaphorical throwdown essentially gave the United States an insurmountable lead in the Space Race, and in 1975, the two countries hugged it out at halfcourt when astronauts from each one took part in a joint mission in the form of the Apollo–Soyuz Test Project.

In the following decades, countries around the world would continue to cooperate in the extraterrestrial realm, and in 1998, a number of different space agencies teamed up to begin constructing the International Space Station, which has been home to a rotating cast of people who don’t mind pooping into bags since it opened its airlocks for its first residents at the start of the millennium.

Going into space is something almost everyone has dreamed of doing at some point in their life, but given the list of prerequisites required to become an astronaut, it’s been out of the question for the vast majority of the population.

However, that’s slowly beginning to change, as the likes of Richard Branson, Jeff Bezos, and Elon Musk have been using the ungodly amount of money they have at their disposal to make space travel more accessible—at least for people who also have huge stacks of cash to burn.

None of the multiple billionaires engaged in the private sector’s own Space Race have done more to advance their cause than Musk, whose SpaceX has been consistently launching rockets, satellites, and a Tesla Roadster into the great beyond as he sets his sights on colonizing Mars and the Moon.

However, Musk is still working his way up to his eventual goal of selling tickets to Mars for as “low” as $100,000 by charging space tourists with a ton of disposable income significantly more to leave the Earth’s atmosphere.

According to The New York Times, SpaceX recently teamed up with a company called Axiom Space to give three lucky people with more money than they know what to do with the opportunity to take a trip to the ISS at some point during the latter half of 2021, which will set each traveler back around an estimated $55 million.

The tickets—one of which has already been purchased—will allow you to get launched into space alongside a trained astronaut before getting to float around the ISS for ten days during a trip beyond the atmosphere that will have the distinction of being the first one where a government agency isn’t involved.

Rich people have all the fun.