New Asteroid Detected, Named The Fourth Most Dangerous To Hitting Earth According To The European Space Agency 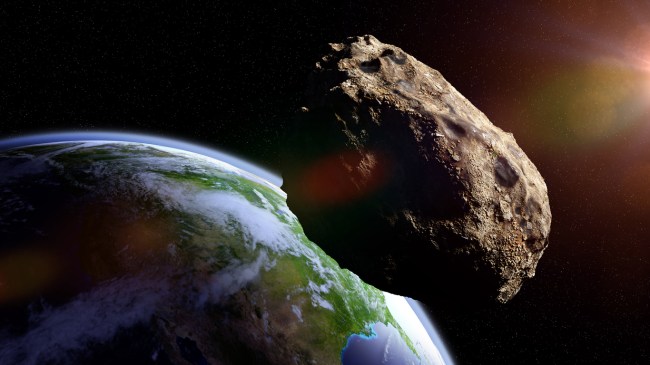 The European Space Agency detected an asteroid that has the potential to crash into Earth. The ESA said the asteroid, named 2019 SU3, could collide with our planet within 65 years.

Scientists discovered the dangerous asteroid this week, and the ESA placed the asteroid on the space agency’s Risk List. The Risk List is the ESA’s “catalogue of all objects for which a non-zero impact probability has been detected.” The 2019 SU3 asteroid is the fourth most dangerous on the Risk List, which uses the Palermo Scale to determine how dangerous a space rock can be based on size, velocity, and probability. The asteroid also made the ESA’s Priority List.

The ESA has designated the 2019 SU3 asteroid as a Near Earth Object (NES). The eye-opening asteroid is estimated to pass extremely close to the Earth on September 16, 2084. The asteroid is expected to get as close as 73,435 miles, but the slightest gravitational interference from other planets could cause 2019 SU3 to smash into Earth. The asteroid orbits near other planets, including Venus, Mercury, and Mars.

There is a 1 in 152 chance of the space rock hitting Earth according to the ESA. While that is a low probability of a collision, that is still an extremely worrying chance.

Thankfully, this asteroid is not gigantic and is believed to have a diameter of 46 feet. For comparison, the 2013 Chelyabinsk meteor that caused 1,491 injuries and property damage to over 7,200 buildings in Russia was 66 feet in diameter.

Because of the small size, 2019 SU3 does not make the classification of Potentially Hazardous Asteroids (PHAs) by NASA. Asteroid 2019 SU3 will “most likely burn up in Earth’s atmosphere instead of hitting the ground.” But fragments can cause damage and injuries, as we saw in the case of the Chelyabinsk meteor.

RELATED: Experts Warn ‘100 Percent’ Chance Of Asteroid Colliding With Earth And Action Needed To Prevent Mass Extinction
NASA is also tracking 2019 SU3, but their tracking only extends until 2077, seven years before the asteroid is scheduled to make its fly-by. There are more than 18,000 NEOs according to a 2018 report by NASA’s Jet Propulsion Laboratory.

Space agencies are preparing for a meteor collision and plan to crash a spacecraft into an asteroid at over 14,000 mph to change the space rock’s trajectory. We might want to have those nukes locked and loaded just in case this asteroid is on a collision course with a major metropolitan area.

RELATED: Scientists Find Massive Balloon-Like Structures In The Center Of The Milky Way Galaxy That Are Emitting Radio Waves