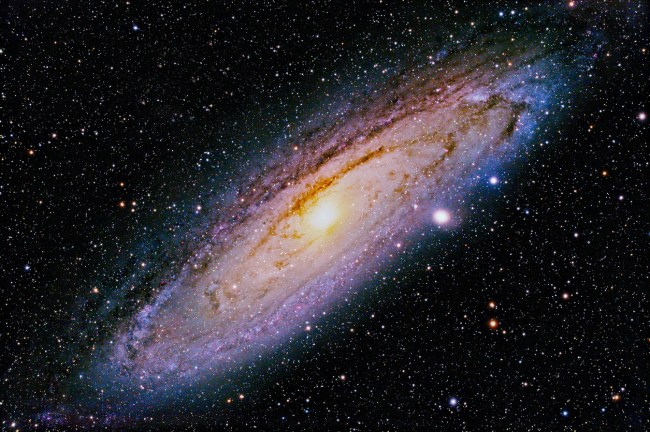 Scientists announced that they have discovered “one of the largest features ever observed” in the center of the Milky Way. The massive celestial bodies that scientists found are two towering balloon-like structures that intertwine in an hourglass shape. Scientists were able to find bizarre astronomical objects because the bubble-like structures emitted powerful radio waves.

On September 11, 2019, scientists released their findings in the journal Nature. Their study discovered a celestial body that “dwarfs all other radio structures in the galactic center [and] is likely the result of a phenomenally energetic burst that erupted near the Milky Way’s supermassive black hole a few million years ago.”

“The center of our galaxy is relatively calm when compared to other galaxies with very active central black holes,” said Ian Heywood, a Hintz Fellow at the University of Oxford, who is the lead author of the study. “Even so, the Milky Way’s central black hole can become uncharacteristically active, flaring up as it periodically devours massive clumps of dust and gas. It’s possible that one such feeding frenzy triggered powerful outbursts that inflated this previously unseen feature.”

This strange space behemoth could have been created by “a massive burst of star formation which sent shockwaves careening through the galactic center,” according to William Cotton, study co-author from the National Radio Astronomy Observatory in Charlottesville, Virginia. “In effect, this inflated energetic bubbles in the hot, ionized gas near the galactic center, energizing it and generating radio waves which we could eventually detect here on Earth.”

The violent explosion that happened near the black hole in the center of the Milky Way had the force equivalent to the explosion of approximately 100 stars. The blast was so extreme that it punched through the matter of space. The structure remains intact because the supermassive black hole at the galaxy’s center is relatively calm.

“This eruption was possibly triggered by vast amounts of interstellar gas falling in on the black hole, or a massive burst of star formation which sent shockwaves careening through the galactic center,” Cotton explained. “In effect, this inflated bubbles in the hot, ionized gas near the galactic center, energizing it and generating radio waves that we could eventually detect here on Earth.”

The scientists believe the two symmetrical bubbles are nearly identical and are brighter along their edges. The balloon-like structures are gigantic and stretch an estimated 1,400 light-years or about 5% of the distance between our sun and the Milky Way’s center.

The humungous balloon-like structure was spotted by the South African Radio Astronomy Observatory (SARAO) MeerKAT telescope, which is a system of 64 dishes spread out over an area of five miles in the Northern Cape of South Africa. The MeerKAT is part of the Square Kilometre Array (SKA) instrument, an intergovernmental radio telescope network in Australia and South Africa that will be able to scan the sky 10,000 times faster with 50 times the sensitivity of any other telescope on the planet.

The Square Kilometre Array (SKA) network of telescopes will be part of the Search for Extraterrestrial Intelligence (SETI) program that attempts to detect alien civilizations on other planets orbiting other stars.

Professor Heywood and his team utilized the telescope’s data to map areas in the center of the Milky Way. While surveying the middle of our galaxy, the scientists discovered the radio emissions from this large bi-polar structure.

“These enormous bubbles have until now been hidden by the glare of extremely bright radio emission from the center of the galaxy,” said Fernando Camilo, the paper’s co-author and SARAO Chief Scientist in Cape Town, South Africa. “Teasing out the bubbles from the background noise was a technical tour de force, only made possible by MeerKAT’s unique characteristics and ideal location. With this unexpected discovery, we’re witnessing in the Milky Way a novel manifestation of galaxy-scale outflows of matter and energy, ultimately governed by the central black hole.”

Gas structures such as the bubbles can be observed because electrons inside the astrological objects produce radio waves as they are accelerated by magnetic fields. The data will allow astrologists to piece together the history of the universe, and these radio signals are like fossils from millions of years ago.

These mysterious structures have huge, long and narrow filaments inside them and these special filaments have not been spotted anywhere else in the universe.

“The radio bubbles discovered with MeerKAT now shed light on the origin of the filaments,” said the senior author of the study Farhad Yusef-Zadeh, who is a Northwestern University astronomy and physics professor. “Almost all of the more than one hundred filaments are confined by the radio bubbles.”

“It is extremely exciting to be able to peer at the center of the Galaxy with such high definition and precision,” said Steve Balbus, study co-author and head of astrophysics at the University of Oxford. “This is the nearest supermassive black hole to us in the universe, and MeerKAT has provided us with front row center seats. We are going to learn an enormous amount about how black holes feed themselves and how they influence their environments.”