NASA’s Curiosity Rover May Have Just Discovered Life On Mars 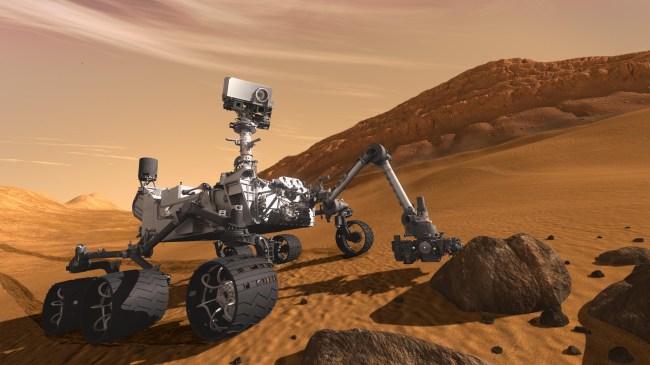 On August 6, 2012, 05:17 UTC, Mars Science Laboratory Curiosity rover landed on Aeolis Palus, a flat area inside the Gale crater on Mars. One of Curiosity’s main missions is to find evidence of past or present microbial life or if there environmental conditions that could sustain microbial lifeforms. The $2.5 billion Curiosity may have just discovered life on Mars.

On Wednesday, the Curiosity rover detected gas in the planet’s atmosphere that could be the smoking gun that there is life on Mars. The Curiosity discovered elevated amounts of methane gas in the air and NASA scientists received the data on Thursday according to the New York Times. Methane gas could be proof that something is alive on the Red Planet.

Tomorrow we’ll take the next steps to try to get @NASAInSight’s mole digging again on #Mars. Here’s the plan: https://t.co/zQYxI8sqq6 pic.twitter.com/TdmFRUPJtN

On Earth, methane gas is often produced by living things. This could mean that there is Martian life. We have methanogens on Earth, which are microorganisms that produce methane gas and live in places where there isn’t an overabundance of oxygen such as swamps and in the digestive tracts of animals and humans, which causes burping and flatulence.

It's #NationalSelfieDay and our @MarsCuriosity rover is a pro selfie-taker, thanks to 17 cameras used for surveying the vast landscape of the Red Planet. 📸 Discover how the rover takes self-portraits using its robotic arm: https://t.co/2QLJzeUDJb pic.twitter.com/U712NLSjxF

There is also a possibility that the methane is not from something living, but rather a subterranean reservoir of methane that is leaking to the surface. The uncertainty is why scientists have scrapped the rover’s previous schedule so that Curiosity could run several experiments in order to try to understand what the source of the methane is.

“Given this surprising result, we’ve reorganized the weekend to run a follow-up experiment,” Ashwin R. Vasavada, the project scientist for the mission, said in an email. The results of this weekend’s experiments are expected to be received by NASA researchers on Monday.

NASA’s Curiosity rover cost $2.5 billion, and is about the size of a car. The vehicle has a seven-foot-long arm, a chemistry lab, 10 science instruments, 17 cameras, and a laser to vaporize rocks.

Science under the clouds

After working hard for 2,405 Martian days and discovering the highest amounts of clays yet during the mission, @MarsCuriosity took a quick selfie break: https://t.co/kZcT0iuc87

This isn’t the first time that we have discovered methane gas on Mars. Last June, Curiosity found complex organic molecules from about 3.5 billion years ago from two different drill sites. Curiosity detected methane gas in the Martian atmosphere.

RELATED: NASA Is Equipping The Next Mars Rover With A Helicopter, The First To Make Interplanetary Travel

“It’s a gas in the atmosphere of Mars that really shouldn’t be there,” says NASA Jet Propulsion Lab scientist Chris Webster.

Take a look at the parts of Mars I hope to explore soon. I hope my rover tracks may help lead the way for future humans on the Red Planet following their exploration at the Moon. #Moon2024 https://t.co/59miATPoEY pic.twitter.com/xINS8DTk10

In 2013, Curiosity detected a sudden spike in methane gas, as much as seven parts per billion. The gas lingered for a few months and then went away. This week’s methane measurement was three times the methane concentration as in 2013.

Methanogens could be extremely helpful in humans colonizing Mars because we already have the technology to use certain types of microbes to provide energy.

Then again, the Arachnids from Starship Troopers lived underground, so maybe we shouldn’t be in such a rush to discover the source of the gas since it’s probably alien farts.

RELATED: NASA Finds Organic Matter On Mars That Are The ‘Building Blocks’ Of Life