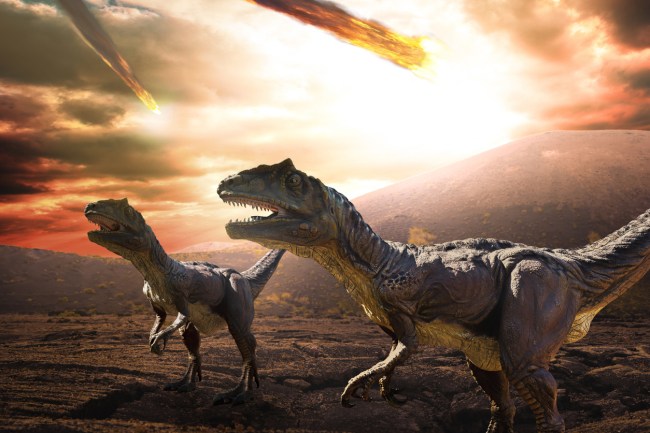 Approximately 66 million years ago, an asteroid believed to be as large as 50 miles in diameter smashed into Earth. Scientists have gone to the point of impact to study the rocks and what remains from the dinosaur-killing asteroid. Using their findings, researchers paint a frightening picture and detail the 24 hours after the Chicxulub impactor rocked our planet.

The asteroid that smashed into the Yucatan Peninsula in Mexico with the force of 10 billion atomic bombs. The immediate impact and the destruction that was to follow decimated the dinosaurs and wiped out approximately 75% of all plants and animals.

A research team with more than two dozen scientists from around the world that was headed by the University of Texas at Austin has been studying material hundreds of feet in the Chicxulub crater. What they discovered was that the Earth suffered from worldwide infernos, tidal waves and intense global cooling; and that was just in the first 24 hours after the asteroid collided with the planet.

Scientists studied a core sample from the peak ring of the 93-mile-wide Chicxulub crater. Sean Gulick, a research professor at the University of Texas Institute for Geophysics (UTIG) at the Jackson School of Geosciences, called the remains from the asteroid impact the “ground zero” that enables researchers to develop “an expanded record of events” on the aftermath of the Chicxulub impactor.

The stunning details about the dinosaur-killing asteroid’s impact on the Earth are frightening. The immediate area of the asteroid impact was instantly vaporized, and the water was displaced and launched in all directions as a humungous tsunami, which reached as far inland as Illinois. The University of Texas Institute believes the tidal waves were hundreds of feet high and traveling at the speed of a jet plane.

The impact was so powerful that water did not return to the impact site for a couple of hours. In one day, the asteroid deposited “about 425 feet of material — a rate that’s among the highest ever encountered in the geologic record.”

The dinosaurs that were close enough to see the asteroid but far enough to not instantly obliterated would not have had a lot of time to enjoy the overwhelming light show. “If you were on Earth and within 930 miles of the impact your view would have been very short as the asteroid comes in at 12 miles per second and hence a blink of the eye,” Gulick said. “Then the energy and thermal effects radiate out from the impact site at various speeds up to the speed of light.”

“So effectively within 930 miles you would have seen very little before being incinerated,” said Gulick, who co-led the 2016 International Ocean Discovery Program’s scientific drilling mission that retrieved rocks from the impact site offshore of the Yucatan Peninsula. “If you were elsewhere on Earth the first effect might well be the earthquake energy arriving through the ground from the impact or perhaps the arrival of ejecta from the crater raining down and causing heating and wildfires.”

In the Earth sample that was studied, there was a layer of charcoal. Researchers believe this is evidence of massive widespread wildfires that would burn hundreds of miles. Once the water receded back into the asteroid’s crater, it also brought back remnants of the charred landscape.

Suspiciously absent from the core sample was sulfur, despite the surrounding areas having sulfur-rich rocks. The theory is that the asteroid impact vaporized rocks with sulfur and released sulfate aerosols into the atmosphere. Scientists estimate that 325 gigatons of sulfur were released into the atmosphere.

“The aerosols would leave the crater at miles per second speed and thus blanketing the Earth in hours to days,” Gulick said. “Like with sunset, as soon the solar energy is blocked, temperatures fall rapidly.” Earth would have been shrouded in darkness for weeks or months, which caused a global climate change followed by a mass extinction.

Rampant worldwide wildfires and the intense thermal collision would release so much sulfur into the atmosphere that it blocked the sun, causing global cooling that would kill most living things that had initially survived the asteroid’s impact.

“The sky would darken and shortly after the heating from the incoming ejecta the temperatures globally would start to plummet as a sulfate aerosol haze surrounds the planet,” Gulick explained. “The Earth would likely no longer look like the familiar blue marble from space and it would take perhaps as long as two decades to clear again fully.”

“The real killer has got to be atmospheric,” Gulick said in a statement. “The only way you get a global mass extinction like this is an atmospheric effect.”

“We fried them and then we froze them,” he said in a statement. “Not all the dinosaurs died that day, but many dinosaurs did.”

The evidence includes bits of charcoal, jumbles of rock brought in by the tsunami’s backflow and conspicuously absent sulfur. They are all part of a rock record that offers the most detailed look yet into the aftermath of the catastrophe that ended the Age of Dinosaurs, said

The research paper titled “The First Day of the Cenozoic” was published in the Proceedings of the National Academy of Sciences on Monday.