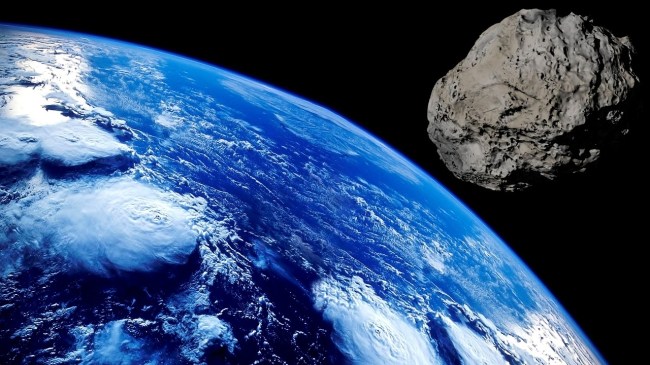 There are astronomy experts who are warning that there is a “100% chance” that an asteroid will collide with the Earth and there is a possibility that the impact will cause a mass extinction.

Greg Leonard is a professor at the University of Otago’s School of Surveying in New Zealand and senior research specialist at the NASA-funded Catalina Sky Survey project. The professor said that there is 100% possibility of an asteroid smashing into Earth.

“But I also know that if we do nothing, sooner or later, there’s a one hundred percent chance that one will get us,” Professor Leonard said. “So I feel privileged to be doing something.”

Leonard, who is an asteroid specialist, was speaking to science writer Bryan Walsh for his new book on the history of extinction, called End Times: A Brief Guide to the End of the World.

Leonard said the chances of being killed by an asteroid are less than dying from a lightning strike. In your lifetime, the odds of becoming a lightning victim in the U.S. is 1 in 3,000. There have been 3,696 deaths from lightning in the U.S. between 1959 and 2003.

Professor isn’t the only person warning that a killer asteroid could hit Earth, other experts warn of potentially catastrophic collisions by asteroids.

The B612 Foundation is a private organization dedicated to the planetary defense against asteroids and other near-Earth objects (NEO) impacts. B612’s President Danica Remy also proclaimed that there is a 100% chance of an asteroid colliding with our planet. “It’s 100 percent certain that we’re going to get hit, but we’re not 100 percent certain when,” Remy said.

Lembit Öpik is the Chairman of Parliament for the space nation Asgardia. The Space Kingdom of Asgardia is a micronation that plans to found a society on the moon by 2043.

“It’s a matter of life and death,” said Öpik, who was a former British politician. “The chance of an impact is 100 percent, you just don’t know when.”

NASA has gone on record to say it “knows of no asteroid or comet currently on a collision course with Earth, so the probability of a major collision is quite small.” NASA has tried to calm fears of impending doom by saying: “In fact, as best as we can tell, no large object is likely to strike the Earth any time in the next several hundred years.”

“It’s likely that we could identify a threatening near-Earth object large enough to potentially cause catastrophic changes in the Earth’s environment, and most astronomers believe that a systematic approach to studying asteroids and comets that pass close to the Earth makes good sense,” NASA explained.

That being said, it was only a month ago when a city-killing asteroid surprised astronomers by how close it was to Earth. Asteroid 2019 OK zoomed towards the Earth at 15 miles per second and soared within 43,500 miles of our planet.

Asteroids don’t even need to actually collide with Earth to be frighteningly dangerous. The Tunguska Event on June 30, 1908, was one of the largest explosions ever in history and delivered 1,000 times greater the power than the atomic bomb dropped on Hiroshima, Japan.

A meteoroid exploded above the Eastern Siberian Taiga and obliterated 770 square miles of forest, destroying over 83 million trees. Thankfully, there were only three casualties because it was in an uninhabited area, but if a similar event happened in a populated area or city, the death toll could have been in the millions.

The asteroid known as the Chicxulub Impactor, which crashed into the Yucatán Peninsula in Mexico, hit Earth about 66 million years ago. The Chicxulub asteroid is believed to have pulverized the planet, igniting the atmosphere and starting a mass extinction, killing off three-quarters of all living things.

So scientists and governments are developing defense strategies to guard the planet against killer asteroids. One defense program is the Asteroid Impact Deflection Assessment (AIDA) that proposes crashing spacecraft into asteroids to alter its path with kinetic impact, but that won’t change the course of planet-killing asteroids.

You could also use nuclear weapons and detonate it near the asteroid and change its course. Another proposal is to paint one side of the asteroid, which would cause the sun to push harder on the one side that is lighter in color.

Here is a video illustrating the apocalyptic scenario of a 300-mile-wide meteor colliding with Earth and how it would wipe life off of the planet.