Some People Are Claiming This Video Of An Unknown Creature Screaming Is Proof Of Bigfoot, But I Call Shenanigans 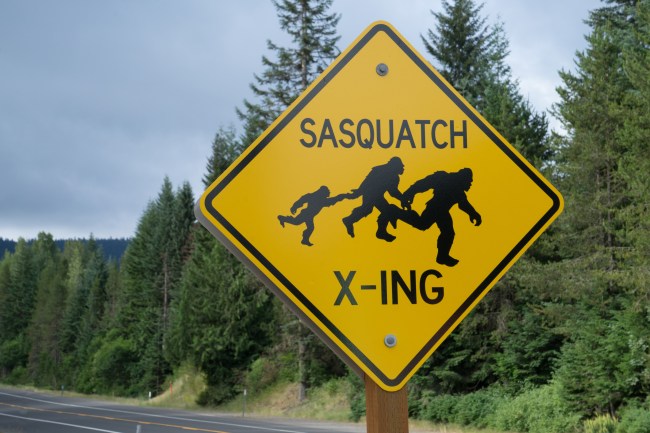 Strap on your tinfoil hats, bros, because we’re about to dive into the Conspiracy Theory deep end. A clip filmed in Northwestern Ontario has many believers thinking this is evidence of Bigfoot’s existence. I’m not convinced but I’ll let you bros check it out and judge for yourselves.

The video’s description claims this person filmed the video with his wife and grandson as they were grouse hunting about 45 kilometers (is that 5 miles or 500?) outside of Sioux Lookout in Ontario, Canada. He claims they heard these robust screams and they lasted for about five minutes but they only captured 3:05 of it and only 2min15sec made it into the clip you see below. This all went down last month on October 3rd.

The family is at least trying to sound pretty convincing with all of this:

‘We walked down a trail to see if we can find a bird, and on our way back to the vehicle, it started,” Meekis said in an interview. “When it let out the first scream, I thought it was a moose, but my mind changed when it screamed again and again.”

Meekis and his wife paused for a brief moment to record the sound. His young grandson, who can be seen in the video, began to howl back at the sound. Meekis explained that his family retreated to their vehicle shortly after that as the cadence of the howling increased.

“I’ve heard many different animals in the wild but nothing like this. I grew up hunting with my grandfather for the first 12 years of my life,” Meekis said. (via VICE)

Soooooooo, the sounds. It’s definitely interesting. I’m torn between thinking it’s a weird wind tunnel created by a unique formation of trees or someone in the woods blasting a sound on some speakers to fuck with these people.

You’ll have to turn your volume up to hear the alleged Bigfoot noise or put your phone/speaker close to your ears.

According to a report on VICE, the online cryptid community is using this as evidence of Bigfoot’s existence while Ontario’s Ministry of Natural Resources and Forestry is being much more practical with their assessment. They offer up much more plausible ideas on what these sounds could’ve been:

“Our biologists say it could be a larger mammal–for example a wolf–but because it’s a considerable distance from the recorder there is no way to know for sure,” Jolanta Kowalski, the media relations officer for Ontario’s Ministry of Resources and Forestry said in an email.

VICE caught up with Dr. David Floyd, an ‘expert in monster mythology’ and college professor in South Carolina, to ask him about why people are convinced this is Bigfoot and what it is about the legend of Bigfoot that persists despite there being zero concrete evidence of a half-man-half-beast creature.

“Even in the 21st century, the notion of a half-human, half-beast figure is appealing, as, to some degree, we recognize it both as contrast to our civility and analogue of our primal potential,” he added.
Floyd pointed out that we “anthropomorphize” our fears, and that nature is still a primal and often dangerous force that humans have yet to totally master.
“One of our primary fears is that of nature, or that which lurked in nature that could dispatch us should we let our guard down or wander too far from the locus of civilization,” Floyd said.

Nature does play some serious tricks on our brain. When we think we’re alone in the woods the snap of a twig can send our minds into freefall, believing there’s a murderous beast lurking out there to get us.

Next time someone tells you that something is extremely unlikely, show them this picture of Elvis and Bigfoot riding the Loch Ness Monster… pic.twitter.com/R9yYZswxnS

Meanwhile, if you search Twitter (find me at @casspa) for #BigFootSighting there are a ton of tweets each day so people are really pushing on with the belief that (s)he exists.

Nobody (yet) is disputing that what the family heard in the woods was a real animal but to believe this was Bigfoot with nothing more than an audio clip as evidence is a pretty big leap. You can read up more on this encounter here on VICE.