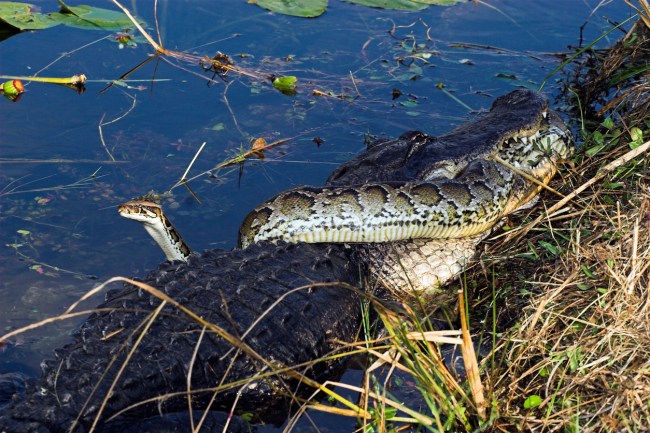 Florida has a bit of a python issue. There was a python slithering out of toilets and biting a Florida man, a 140-pound python with 73 snake eggs, and there has even been a Burmese python that was a record-breaking 18-feet-long. Burmese pythons are invasive species that are dominating the habitat. So much so that the South Florida Water Management District Governing Board established the Python Elimination Program in 2017 to limit the damage the foreign snakes could do to other species.

A video shared on Twitter by the Everglades National Park official account caught the moment an alligator made a Burmese python its lunch.

“CHOMP!!! This invasive Burmese python was no match for our mighty, native American alligator,” the tweet said. “With all the news of pythons overwhelming the Everglades ecosystem, it gives us hope to see our native animals fighting back.”

CHOMP!!! 🐊 This invasive Burmese python was no match for our mighty, native American alligator!

With all the news of pythons overwhelming the Everglades ecosystem, it gives us hope to see our native animals fighting back. 💪

RELATED: King Cobra And Giant Python Literally Fight To The Death Of Both Lethal Snakes

The alligator was chowing down on the huge snake. The national park said the original video was taken by Richard Petrosky, and estimate that the alligator was as giant as 8-feet-long.

The United States Geological Survey (USGS) estimates that there are tens of thousands of Burmese pythons in the Everglades.

Adult Burmese pythons pretty much have only two predators — alligators and humans beings. The apex predators will eat nearly every animal they come across. Researchers said they have seen declines in the number of raccoons, bobcats, and opossums in areas where the massive Pythonidae originally from Africa, Asia, and Australia.

Over the past few years, the Florida Fish and Wildlife Conservation Commission and the South Florida Water Management District rewarded hunters to take out Burmese pythons in the Everglades. Most recently, there was a 10-day event inspired by the Super Bowl called the “Python Bowl,” where hunters captured 80 pythons. Let this alligator sign up for next year’s Python Bowl.

Over 750 people turned up for the 2020 Python Bowl in Florida, catching 80 of the invasive snakes, the Florida Fish and Wildlife Conservation Commission said. https://t.co/jahdxbjRJz pic.twitter.com/4aq4KDFIp6

RELATED: 14-Year-Old Wrestles A Massive Python Out Of A Truck Before Heading Off To School