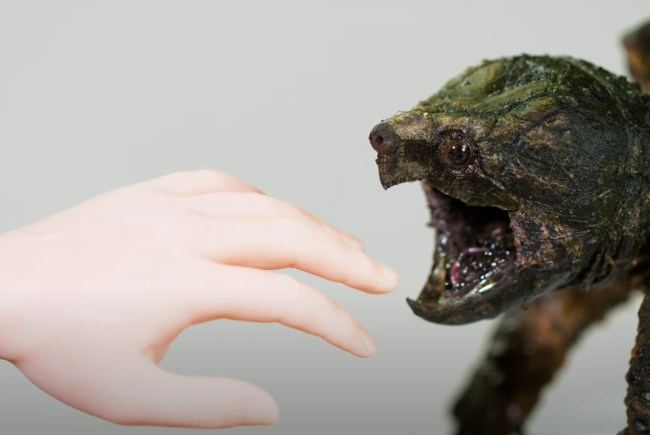 I grew up in a house with a long creek that ran through the backyard that’s dry these days but when I was a kid it was always full of turtles, snakes, frogs, and other critters. I’d always see owls and other birds of prey back there because there were so many ‘easy meals’ for the birds. I was one of those kids who went through a long phase of catching snakes and turtles. I’d catch one, run it home to show my family, and bring it back to the creek. One time, I brought back a gigantic alligator snapping turtle and everyone lost their minds.

I’m not really certain how big it was because I was a kid and the alligator snapping turtle was comparatively enormous but for all I know it could’ve just been a pretty big snapper that was still completely capable of ripping my fingers off like it was nothing. It wasn’t until I was in H.S. or college and watching MythBusters or a similar show that tested bite force that I realized how insanely powerful the bite of an alligator snapping turtle is and how nobody should ever get near them without an expert on hand.

Coyote Peterson is the face of the Brave Wilderness YouTube channel. He used to go around getting stung and bitten by every painful critter out there. But for this episode, he’s brought in the lifelike test dummy to take the bite because as you’ll soon see the alligator snapping turtle is able to bite off fingers as easily as I’d take down waffle fries from Chick-fil-a.

The portion of this video with the alligator snapping turtle comes around the 7:20 mark so if you’re looking to jump ahead you can scroll to that time in the video. However, he also has a Panther Chameleon and Pacman Frog in this video which are both awesome. I used to have a 1-pound albino Pacman Frog as a pet back in elementary school. They are WILD looking. Check it out:

Seriously, I know kids are dumb but what in the actual hell was I ever thinking picking up one of these in the wild? Just based on looks alone, everything about the alligator snapping turtle screams ‘DO NOT TOUCH ME. I AM ARMORED AND DANGEROUS.’ They look like dinosaurs, truly, more than any other species I can think of. You have to be a complete moron, and apparently I was, to see this in the wild and think it’s a good idea to catch it and pick it up.