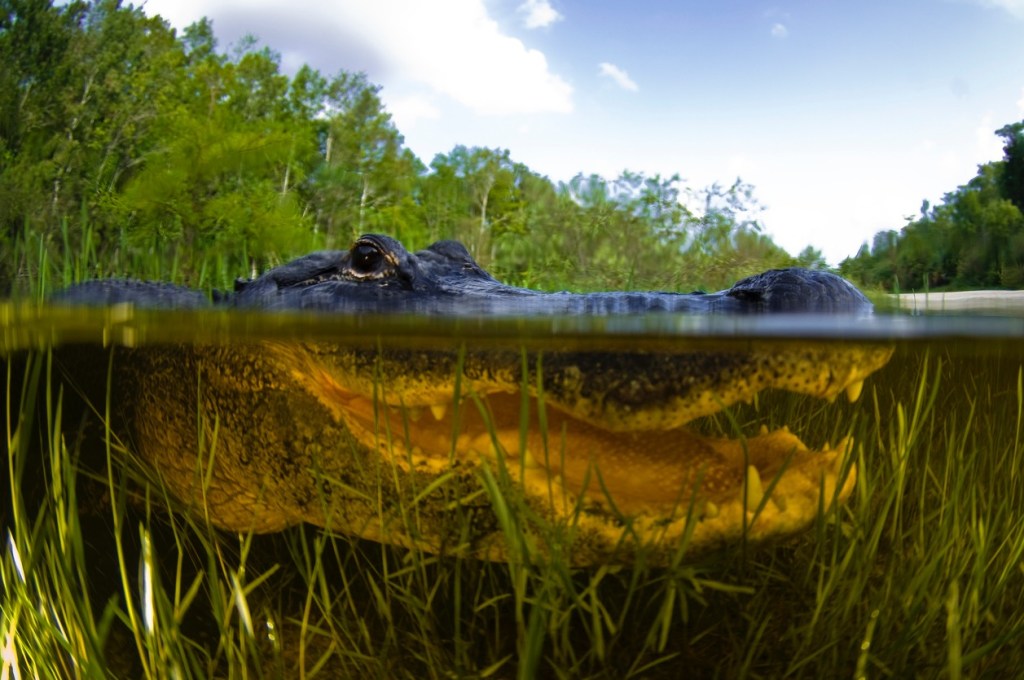 A wildlife photographer by the name of Bobby Wummer filmed some of the most stunning alligator footage we’ve seen in years.

He was filming in Big Cypress National Preserve which borders the Everglades National Park in South Florida. This is one of the best places in the country to photograph alligators as they are pretty much everywhere you look. Bobby rigged a GoPro up to a 12-foot extension pole to get a close-up shot and what happened next was wild.

I can’t say for certain that the alligator felt threatened but it clearly didn’t like the GoPro camera invading its space. The camera captured footage of the 12-foot gator lunging and then chewing on the camera for a while before giving up and moving on. Miraculously, the GoPro only sustained minimal damage so Bobby Wummer was able to retrieve this wild footage from the swamp and show us what it’s like to be eaten by an alligator.

Here’s what his caption said on Instagram, to add a little context to what was going on there:

“I was trying to get a close up Florida alligator 🐊 video using my #Gopro camera 🎥. I used a twelve foot extension pole to place the GoPro on the end and I was well above him.

As you can see I did get an EXTREME close up inside the gators 🐊 mouth. This was not done intentionally, I didn’t think that he would actually lunge up and bite down on the cam. I was lucky 🍀 and didn’t play tug of war which would have probably been the end of camera!

The alligator then realized that the camera was not food and he released the camera.

Fortunately I was able to retrieve the GoPro with only minor damage to the camera.”

The gator action is HOT around Florida. It’s currently mating season for these crocodilians and everywhere I go right now I see one sunning itself on the bank of a pond or lake. Did I mention that I live in Southwest Florida? Anyway, they are EVERYWHERE right now. I played golf on Sunday and counted eleven alligators on the course.

My point is, is you are trying to get a close up look at an alligator right now you wont’ have to travel all the way to the Florida Everglades. You can take a look in any pond you pass and you’ll likely see one.

What It’s Like To Be Eaten By A Shark!

A similar video surfaced last week from The Maldives. In this footage, a tiger shark swallows a waterproof camera and gives us a look inside of the shark’s mouth to see what it’s like in there…

Unique Teeth On This Species

It’s amazing that this shark was able to swallow the camera out of curiosity and then regurgitate it without any of its inch-long teeth puncturing the camera’s case. Tiger Sharks have pretty unique teeth. This is the second-largest predatory shark species behind the Great White and they can grow up to 18-feet in length. On average, their teeth grow to about 1-inch and there are 48 identical teeth across the top and bottom.

Now picture 48 inch-long razor-sharp knives and somehow this camera bypassed all of those and made it out without being damaged. These sharks also have a bite strength of 6,000 pounds per square centimeter which is strong enough to make sea turtles and their incredibly tough shell a regular meal for the species.

I can’t let you leave without checking out this article. An alligator was recently seen eating a stingray in Florida! Those are two species that don’t often cross paths so it’s pretty wild to see the gator taking one down.

There was also this wild footage from a construction site not too far from my home:

According to Fox35Orlando, that gator caused a cool $2,500 in damage to the construction of the new home before it was discovered by one of the workers.

Determining the age of an alligator is never an exact science but a 12-footer is generally believed to be around 40 years old. It’s nice to see the wrangler and construction workers treating that gator with some dignity after a long life. I’m sure it was just as pissed to be trapped inside that house as they were to find it there.

12-footers also weigh anywhere between 475 and 525 pounds, on average. Moving anything that heavy requires a lot of muscle unless the alligator goes willingly. And it’s not as if that gator left the house easily. It broke into the famous ‘death roll’ on its way out once the wrangler got a lasso around its head.