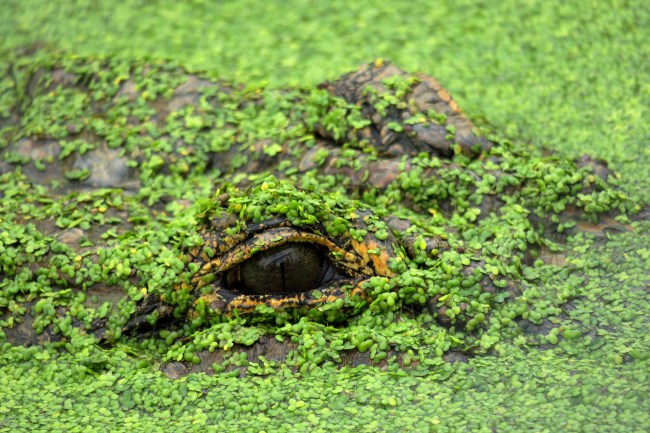 When humans inhale helium from balloons are voices go incredibly high like Mickey or Minnie Mouse. We’ve all done this at birthday parties when we were kids. I actually have no idea whatsoever what the health risks of huffing helium are and I’m pretty sure my parents didn’t either because the cousins and I were allowed to suck down helium freely at birthday parties.

We know what happens when we inhale helium but what about alligators? That’s not a question that would’ve ever crossed my mind in a million years. Mostly because it never would’ve occurred to me that you could run a scientific experiment where you actually got an alligator to inhale helium to test what would happen.

This experiment won an ‘Ig Nobel Prize for Acoustics’ and biologist Tecumseh Fitch said the goal was to test “whether alligators have vocal tract resonances like human speech.” The researchers used a Chinese Alligator in an airtight chamber where they were able to rapidly pump in helium and record the audio.

I’m assuming that most of you have heard an alligator’s guttural bellow before. It is a sound that’s like white noise to me. I grew up with alligators in the pond behind our house and in H.S. I once found a gator in the boy’s bathroom. They’re everywhere in Florida. So this experiment immediately piqued my interest. I won’t spoil too much for you but if you’re expecting the alligator to sound like Minnie Mouse you’re out of luck:

ICYMI: If humans sound like Minnie Mouse after inhaling helium, would an alligator squeak from the gas used to float balloons? https://t.co/wazkG8uQRH pic.twitter.com/XmUizcUAXe

The results are interesting. They imply that the alligator’s bellow correlates to its size which is important for mating season. Here’s the rundown from Reuters:

Alligators bellow a lot during mating season, possibly as a way to signal body size and mojo, the researchers said. By raising the vocal frequency, helium made the reptile sound less of a hunk.

The alligator on helium did not squeak, but let out a belch.

To the untrained ear, it might not have sounded like a whole lot changed but the bellow turned into a belch and that belch could’ve been the difference between an easy mating season or an incredibly difficult one.

If you want to familiarize yourself with the sounds of alligators, here’s a popular video on YouTube of exactly that:

I hope you had that up at full volume and were catching strange looks from people around you when playing that.