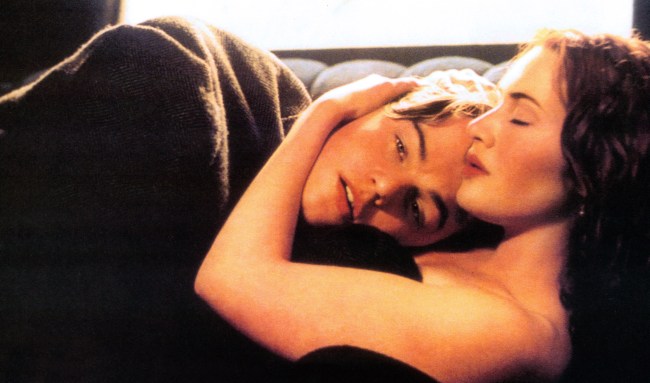 First off, anytime you discuss the movie Titanic it must be brought up that Miss Rose Dawson Calvert should have let poor Jack Dawson climb on to the damn door with her. That is a given. It doesn’t matter what Billy Zane or James Cameron say.

Now then, with that out of the way, did you know that the aforementioned Cameron shot an alternate ending to the movie Titanic?

And did you know that it is really, really, REALLY bad?

We know this because, for some reason, 24 years after the release of Titanic, this painful-to-watch alternate ending has made its way back on to the internet, and people cannot believe how terrible it is. That is not hyperbole.

In this alternative Titanic universe, instead of the elderly Rose surreptitiously dropping the Heart of the Ocean necklace into the water then going off to quietly die in her sleep, she gets caught in the act by treasure hunter Brock Lovett (played by Bill Paxton, R.I.P.).

Check out this dialogue…

“I’m here to put it back where it belongs,” Rose tells Brock.

“Wait. Just let me hold it in my hand. Please?” replies Brock. “Just once.”

“You look for treasure in the wrong places, Mr. Lovett,” Rose tells him. “Only life is priceless. And, making each day count.” (Irony much, Rose? Poor Jack.)

she's still a murderer in my book. pic.twitter.com/AZLg4NPT4t

Then she flips the necklace over her shoulder into the water with a squeak and a grin.

“Jesus, no!” shouts one of Brock’s crew members, who then peers over the side of the boat and announces, “That really sucks, lady!”

And it just gets more cringey from there as Brock and Rose share a good chuckle.

The alternate ending to Titanic is hilarious. This would have absolutely ruined the film for me pic.twitter.com/L3vSrSb72e

Take a peek at some of the many reactions to the Titanic alternate ending to cleanse your brain of having just watched that.

The squeak she makes when she throws it overboard 😂

“Would you like to dance?” takes it for me. And her hair extension mullet.

If you’re a real glutton for punishment, the man who got this viral ball rolling, Pat Brennan, also shared the full 10-minute ending on Twitter.

For everyone that wants it, here is the full 10 minute Alternate ending https://t.co/n7Tfnx5wlA

This is one of those times when I can't believe this website is free.