Leo, Brad, And Margot Robbie Weigh In On Whether Rose Could Have Saved Jack In ‘Titanic’ 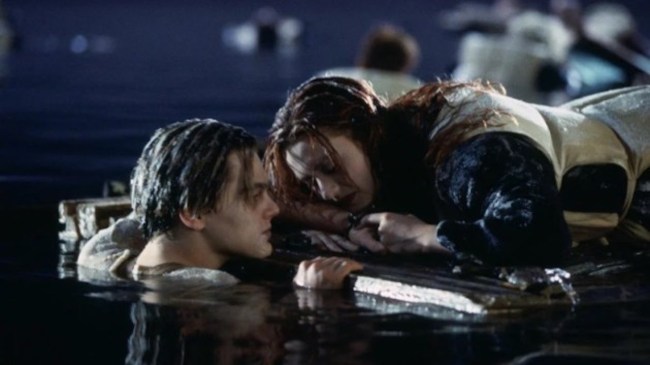 When it comes to the ending of the 1997 James Cameron classic Titanic, it is essentially an American pastime to have an opinion on whether or not Rose’s selfish fat ass could have scooched over and made a little room for Jack, who was, you know, slowly and painfully freezing to death.

And knowing that everyone has an opinion on the controversial, yet still iconic, ending, MTV News decided to ask the stars of Once Upon a Time in Hollywood — Leonardo DiCaprio, Brad Pitt, and Margot Robbie — for their opinion on the Great Door Debate of 1997.

When Robbie was asked, she said she vividly remembers watching the classic James Cameron record-breaker as a kid:

“Oh my gosh. I remember bawling my eyes out when I was a girl. That is the biggest controversy, I think, in modern cinema,” Robbie chimes in.

“Did you mention it at the time? Were you like, ‘Should we make the door smaller so I–‘” she righly questions before Leo cuts her off, once again saying he has no comment.

Brad slickly said he’d have to go back and re-watch before quietly telling Leo that he “could’ve squeezed” onto the door.

As for the Titanic star himself, Leo stuck to his guns and consistently repeated that he had “no comment”, likely fearing that James Cameron would find him in the night and drown him in Na’vi blood had he said anything otherwise.

We asked @LeoDiCaprio if he could have fit on the door at the end of #Titanic, and his #OnceUponATimeInHollywood co-stars @MargotRobbie and Brad Pitt seemed to think so 😂😂😂 pic.twitter.com/nsOMZpXhFz

You can see Leonardo DiCaprio, Brad Pitt, and Margot Robbie together on the big screen when they star in ONCE UPON A TIME IN HOLLYWOOD — Quentin Tarantino’s 9th film — which will be released in theaters next week on Friday, July 26.