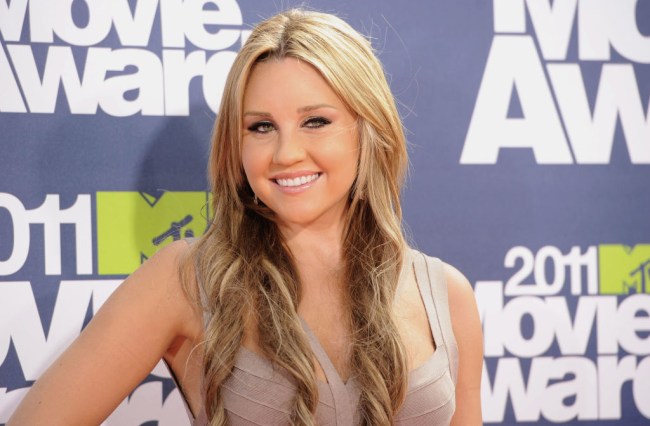 When you think of celebrities with face tattoos, you think of Mike Tyson, Post Malone, Lil Wayne, Travis Barker, and Lil Xan. But now you can add Amanda Bynes to the list of famous people with their face inked up.

On Monday, Amanda Bynes shared a rare Instagram photo that debuted her new face tattoo that may or may not be real. Bynes appears to have a new large heart tattoo on her cheek that is not symmetrical. The former Nickelodeon star sports pink hair and a septum piercing in the selfie. The post of her new ink is captioned with an alien emoji.

Several fans of the 33-year-old actress who starred in Nickelodeon shows All That and its spinoff series The Amanda Show were worried about Bynes, and hoped that the face tattoo was not real. Bynes has since disabled comments on the Instagram pic.

Maybe this is a “new decade, new me” moment for the former child actress who had her 2010s plagued with battles with substance abuse. Bynes hasn’t appeared in any TV shows or movies since 2010’s Easy A with Emma Stone.

The new tattoo comes two weeks after she checked herself out of a sober-living facility. Last January, Bynes voluntarily entered a mental health facility after suffering a stress-related “relapse.”

Bynes is now staying with her parents, while she looks for her own place, according to a report by E!.

A source said Bynes, her parents, and their conservatorship attorney were at a Ventura County courtroom to make sure that it was acceptable that Amanda lives on her own now that she is out of the sober living facility.

The report from mid-December also said that Bynes dropped out of the Fashion Institute of Design and Merchandising in L.A. that she had been attending. She had graduated in June with an associate’s degree, but had returned to get her bachelor’s degree in fashion.

Also this year, Aaron Carter unveiled his massive face tattoo and Justin Bieber got a small tattoo on his face as a tribute to his wife Hailey Baldwin.