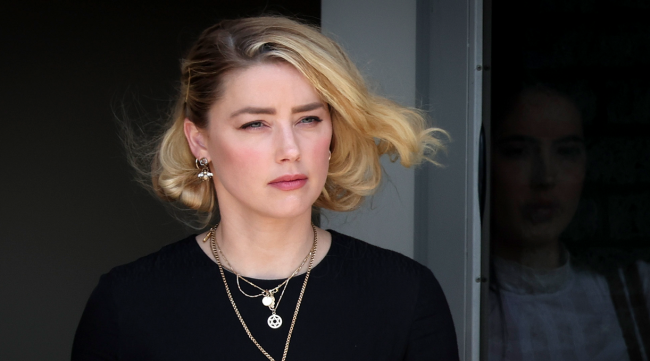 In her first interview since losing the defamation trial between herself and her ex-husband Johnny Depp, Amber Heard says she doesn’t “blame” the jury for issuing a verdict in his favor.

“I don’t blame them. I actually understand,” Heard admitted to Today host Savannah Guthrie. “He’s a beloved character and people feel they know him. He’s a fantastic actor.”

Heard was ordered to pay Depp $10 million in compensatory damages plus another $5 million in punitive damages (which was reduced to $350,000 because of the state of Virginia’s statutory cap). The jury also awarded Heard $2 million in compensatory damages for her countersuit claim of defamation against Depp. So she now owes the Pirates of the Caribbean actor at total of $8.35 million – an amount her lawyer says she “absolutely” cannot afford to pay.

During her Today interview, Heard blamed the poor public relations and social media onslaught (she fired her PR team mid-trial) that she received for swaying the jury.

“I don’t care what one thinks about me or what judgments you wanna make about what happened in the privacy in my own home in my marriage behind closed doors, I don’t presume the average person should know those things,” Heard said in a clip released on Monday. “So I don’t take it personally. But even somebody who is sure I’m deserving of all this hate and vitriol, even if you think that I’m lying, you still couldn’t look me in the eye and tell me that you think on social media there’s been a fair representation. You cannot tell me that you think that this has been fair.”

When Guthrie brought up the evidence that was presented to the jury perhaps being the reason for her loss in the case, Heard responded, “I’ll put it this way, how could they make a judgment? How could they not come to that conclusion? They had sat in those seats and they had heard over three weeks of nonstop, relentless testimony from paid employees, and towards the end of the trial, randos, as I say.”

Reactions to Amber Heard’s statements on Today were, as was the case during the trial, a very mixed bag.

The jurors didn’t read any of the social media stuff, they listened to the evidence & concluded she was lying. I suggest it’s time for Ms Heard to stop playing the victim. https://t.co/P79K64UtIO

Social media judgment might matter even more…because that impacts her career…if we all believed her and thought the verdict was unjustified she wouldn't lose her standing and her roles. She's fighting for her career now!

It is expected that Heard will appeal the jury’s verdict against her in the case.