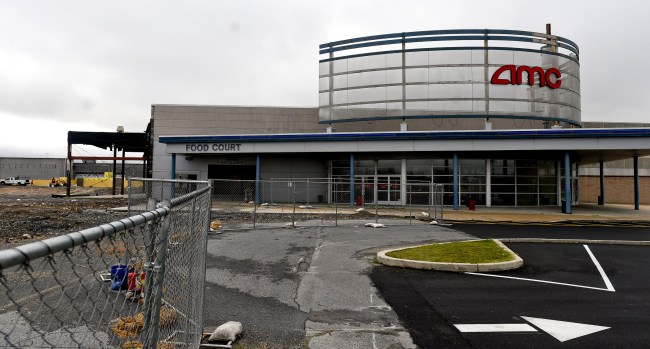 Back in late August, AMC Theatres reopened most of its locations and many of them sold out, according to AMC Entertainment Holdings Inc. CEO Adam Aron.

That, however, was after around five months of being closed, and other than Tenet, didn’t include any new movies of real note being screened at the theaters.

Now, according to financial filings released on Tuesday, AMC says that it expects its reserves of cash to be “largely depleted” by the end of 2020 or in early 2021.

Gizmodo reports that AMC may have to take on additional debt and pursue equity financing, renegotiations with landlords, asset sales, or joint ventures.

However, it added that there is “significant risk that these potential sources of liquidity will not be realized or that they will be insufficient to generate the material amounts of additional liquidity” required to keep the company alive until moviegoers return to theaters.

AMC reported it had opened some 494 of its 598 theaters in the U.S. as of last Friday, though they are operating at 20 to 40 percent capacity, and overall attendance stood at just 15 percent of a year prior. The remaining 17 percent of theaters that remain closed are in states like California and New York, homes to “some of the Company’s most productive” venues.

One way AMC is now trying to bring moviegoers back is by offering to rent out an entire screen in their theaters to groups of people for as low as just $99, reports UPI.

AMC announced the rentals, available in every state except New York, Alaska and Hawaii, allow up to 20 people to attend a private screening in their own theater.

The rates vary depending on the movie being shown, the location of the theater and add-ons such as concessions, a microphone for speaking to the crowd and extra time in the theater.

There are currently 16 films listed as being available for rent, including Tenet, Sonic the Hedgehog and The New Mutants. 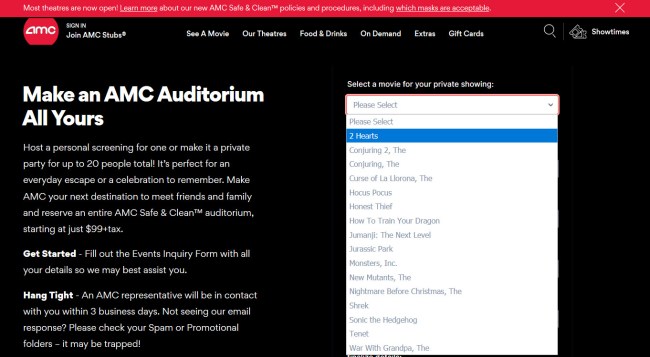 According to CNN, the price can rise up to $349 for a theater rental, depending on the movie selected, the theater’s location, plus add-ons.

“We have to prepare for the inevitability that one, or more, of the major chains may not survive if this situation continues to lurch into next summer,” Jeff Bock, a senior analyst at entertainment research firm Exhibitor Relations, told CNN. “The number of movie theaters that will close on a permanent basis will be directly proportional to how long it takes the US to stomp out the virus.”

Wonder Woman: 1984 director Patty Jenkins, who is still holding out hope that her film will debut in theaters on Christmas Day, told Reuters that she worries about cinemas going the way of the dinosaurs.

“If we shut this down, this will not be a reversible process,” said Jenkins. “We could lose movie theater-going forever.”

The National Association of Theatre Owners said 69% of small and mid-sized cinema companies could be forced to file for bankruptcy or shutter permanently.

Jenkins said widespread closures would lead Hollywood studios to stop investing in films for theaters, and turn to streaming instead.

“It could be the kind of thing that happened to the music industry,” she said, “where you could crumble the entire industry by making it something that can’t be profitable.”

“I don’t think any of us want to live in a world where the only option is to take your kids to watch a movie in your own living room,” Jenkins added.