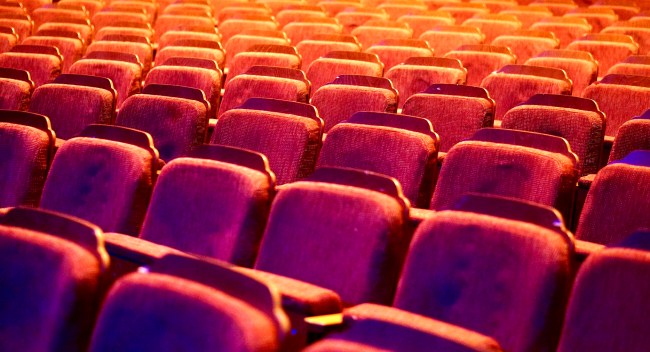 So, naturally, because…people, on Friday it was reported that out of the 100 AMC Theatres which reopened on Thursday, including metropolitan areas like Atlanta, Chicago, Dallas, Miami, Las Vegas and St. Louis, many of them are already “sold out,” according to AMC Entertainment Holdings Inc. CEO Adam Aron.

“We’ve been waiting for this for five months, and we’ve spent so much time and effort to make sure that we get opened safely, cleanly, responsibly,” Aron told Fox Business’ Liz Claman, “Everybody’s wearing masks. Social distancing is very important. We set up plexiglass shields.”

Here's a closer look at what to expect during your next visit to #AMCTheatres! The full AMC Safe & Clean plan: https://t.co/ajYqNYREu6 pic.twitter.com/cS3GBnloAx

“You could eat off the floor of our theaters, they’ve never been this clean,” said Aron, making me wonder how one would be able to do such a thing while wearing a mask. Oh, right, AMC and other theaters have said they won’t require patrons to wear a mash while they aer eating – which is basically the entire time you’re in the theater if you buy a tub of popcorn.

Apparently the lure of 15 cent ticket prices is worth more than the health of hundreds of people, their relatives, and well, anyone else they come into contact with after watching the movie – which, since there haven’t been any new releases in months, will mean movies like The Empire Strikes Back, Black Panther, Grease, Ghostbusters, and Back to the Future. TOTALLY WORTH IT!

Following the first day, these films ticket prices will jump to $5, while new releases, like Unhinged, The New Mutants and Tenet, whenever they actually come out, will be priced starting at $10.

AMC is hoping to ramp things up even further with two-thirds of its locations planning to reopen by Sept. 3.