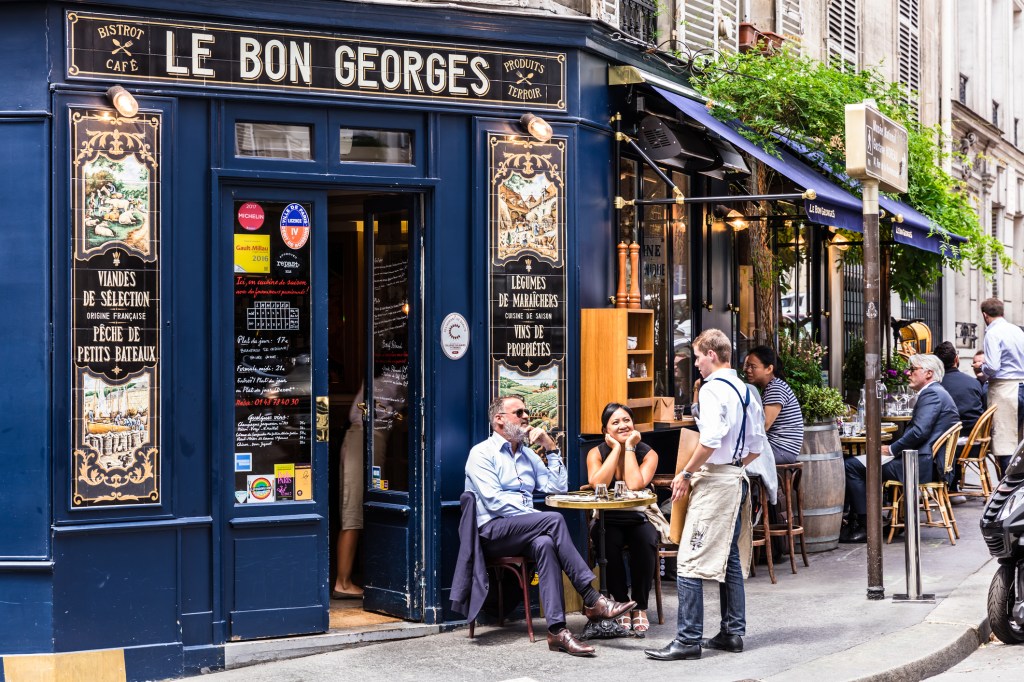 It’s called la pause déjeuner. No, that’s not some fancy, seductive lingo used by millennials when referencing butt stuff. It’s French for “lunch break,” and it is one of the most sacred times of the day in that part of northwestern Europe. Why? Because that’s the way it should be, that’s why.

The French seem to have this bizarre life all figured out. They’re not wound nearly as tight as Americans. Not only does their culture grossly reject the daily grind, but it also doesn’t stress the importance of amassing wealth. To them, life is all about enjoying what little time we have on this whirling madhouse of a planet, and that means bringing the machines of industry to a screeching halt for a few hours every day to hang out and savor in a small victory known as lunch.

Although everyone in France still has to make a living, the country understands balance. Meanwhile, in America, the greatest country in the world, the population is continuously running at full throttle in an attempt to get it all while they can. Workers across the U.S. are putting in no less than eight hours a day and a lot of times MORE just to keep up with the pulse of survival. We’ve been programmed all of our lives that we must “work hard” to achieve success. If you’re not always doing something, well, then you’re on your way to being nothing.

I’m here to tell you that’s a load of crap. Studies have even shown that busyness is not indicative of accomplishment. Researchers at Stanford University published a paper a couple of years ago showing this to be true. They found productivity sharply declines after a person puts in more than 50 hours a week. Employees trying to get ahead of their workloads by putting in more than 50 hours a week weren’t kicking any more ass than those who didn’t.

The French have presumably understood this concept for a long time. It’s part of the reason that they don’t put a heck of a lot of stock into capitalistic concepts that encourage people to burn the candle at both ends. They emphasize taking long lunch breaks (around two hours), complete with three and four-course meals outside the workplace. The French don’t believe in slave-driving for profits.

And they’re all for naps, too!

Up until recently, it was technically illegal in France for anyone to take a working lunch. The idea was that employees needed to step away from their jobs for a while, enjoy food and wine with colleagues, and even grab a few minutes of shut-eye before returning to finish work for the day.

The country’s lunch decree has since been amended to keep people from getting sick and dying from the Rona. Now, France allows businesses with more than 50 employees to do lunch breaks at their desks. I don’t know if this means they’re eating sandwiches over the computer or if they’re having duck confit and proseccox catered in. Either way, it’s temporary. The full scope of la pause déjeuner will almost assuredly make a comeback once this virus starts to calm down.

Unfortunately, lunch breaks in the United States are pretty much destined to remain gross, rushed, and largely unappreciated. I’m convinced that this snag in the fabric of society needs to change.

Take a look in the parking lots of factories across the Land of The Free, and you’ll almost certainly find a slew of miserable workers, stuffing their faces with white-bread sandwiches inside their vehicles. They might also be strewn around picnic tables in designated break areas outside the plant, anywhere that keeps them chained to the job. Because there isn’t a whole lot of time to relax and enjoy a nice lunch for most American workers.

The average lunch break is only around thirty minutes (sometimes less), hardly enough time to grab food, eat and gather some semblance of sanity before punching the clock again. Even in the white-collar world, things aren’t much different. Lunchtime is typically just another appointment or sales call. It’s more about earning than nutrition and reflection. It’s a moment to fill the empty void in our stomachs with artery-clogging fast food that in no way helps us become more productive for the remainder of the day. Regardless of the uniform, most American employees are scarfing down lunch just to get back to work as quickly as possible. They have no idea why they are in such a rush to work their lives away, and they aren’t in any hurry to figure it out. Sweet Jesus, it’s no wonder the working class is so unhealthy and standing at the proverbial ledge waiting to jump.

It doesn’t have to be this way.

The entire world has been in a state of upheaval since this bug forced us into lockdown and largely removed us from society. Some were pressured to work from home during this situation, where they possibly adopted new, progressive lunch routines as part of the deal. They were the lucky ones. Sure, those stay-at-home lunches probably included more day drinking than in times past. Can you blame them? I feel like the American worker’s mindset was caught dangling somewhere between a fear of dying and trying to get its bearings in a post-apocalyptic environment. At the time, nothing really seemed to matter anymore, and the future was bleak. So, people working from home often got drunk early just in case the sun decided to never shine again.

By now, though, the population has adjusted to the life and times of the Rona and everything that comes with it. We’re wearing masks, social distancing, and Fauci-ing – whatever the heck that means. Truth be told, it’s going to be a while before “normal” makes a comeback. But when it does, America would be wise to incorporate the laid-back philosophies of France’s la pause déjeuner.

If we’ve learned anything over the past year, it’s that everything we’ve come to count on and accept as gospel can be quickly ripped to pieces and sent plummeting into a pit of certain doom. Taking some extra time each day from here on out to better care for our physical and mental well-beings should be a part of the nation’s new approach to achieving, not only an economic sound society, but one that is mentally sound, as well. It can be done, and research suggests that this approach can even be more profitable. That’s right, companies won’t go bankrupt by giving their employees more personal time throughout the day, and the country isn’t about to sink into socialism just because we embrace a more health-conscious doctrine and lunchtime routine.

Listen, long hours are overrated. But by relishing in good food, enjoying a cocktail or two, and laughing a little more midday, working-class America could become a more civilized bunch. At the very least, it would allow more people to get day drunk while they search for a better job.