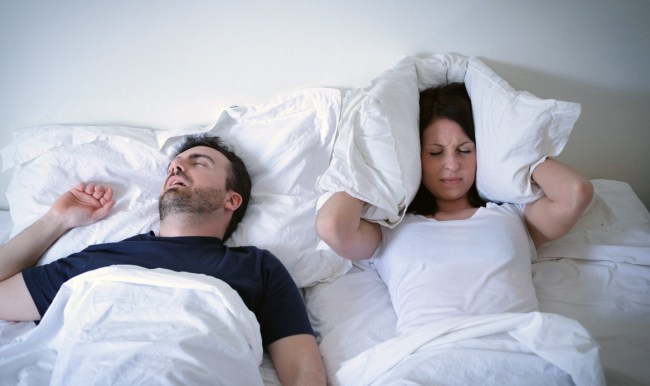 Nearly half of Americans in a relationship or married (46 percent) admit to wanting a sleep break-up from their partner, according to new research.

A new study of 2,000 Americans who live with their partner found that things aren’t always sunshine and rainbows in the bedroom when it comes to sleeping harmoniously.

When asked on whether they prefer to sleep in a separate bed, nearly half of those polled admitted they would rather sleep alone at least some of the time.

In fact, one in five people (19 percent – 373/2000) who are coupled up name their partner as the biggest thing interrupting their sleep every night.

The new survey, conducted by OnePoll on behalf of Slumber Cloud, found that sharing your bed can sometimes lead to a long night of restlessness, with half of couples saying their partner snores too loud, and 37 percent saying they simply just get too hot lying next to their partner.

The problems don’t stop there, either, as 32 percent of survey respondents say they spend all night fighting over the covers with their partner, with one in five men (22 percent) complaining they deal with hair in their face all night.

But sometimes it’s only torture for one person, because what is a relationship without sacrifices? Three in four heroes report they sacrifice their own quality of sleep for their partner, by not moving from an uncomfortable position so as not to wake them.

It gets so bad sometimes that over half (57 percent – 1371/2000) of people who cohabitate with their partner say they’ve actually snuck off in the middle of the night to the couch to get some much-needed shut-eye.

Over half (51 percent – 1012/2000) would go so far as to say they are “thermally incompatible” with their partner, meaning one prefers a warm sleeping environment and the other prefers a colder one.

“Sleepers were quick to identify their bedding as a source of those sleepless nights,” said Willy Madison of Slumber Cloud. “Whether it was fighting over the covers or waking up in a sweaty mess, we at Slumber Cloud know just how important a comfortable bed is to your quality of sleep.”

Sleeping separately doesn’t have to be the taboo idea it once was, because over one in ten couples (12 percent) have already completely adopted the practice, and 30 percent of couples have also openly discussed the idea.

Only 31 percent (621/2000) of Americans in a relationship think a successful relationship requires sleeping together, and one in four (24 percent) think that sleeping separately can even improve a relationship.

But, according to the study, the happiest couples are the ones that sleep together, with those who “never” sleep separately being over twice as likely to rate their relationship happiness a 10 out of 10 than those who “always” sleep separately (58 percent to 27 percent, respectively.)

“According to our survey, couples will sacrifice sleep to be with their partner, but it doesn’t have to be this way,” continued Madison. “Slumber Cloud bedding utilizes NASA-engineered technology to control the temperature of your bed so both of you can sleep in perfect harmony… no more pushing, pulling, or fighting over the covers.”