Americans Spend 284 Days Of Their Lives Wishing They Were On Vacation, According To New Research 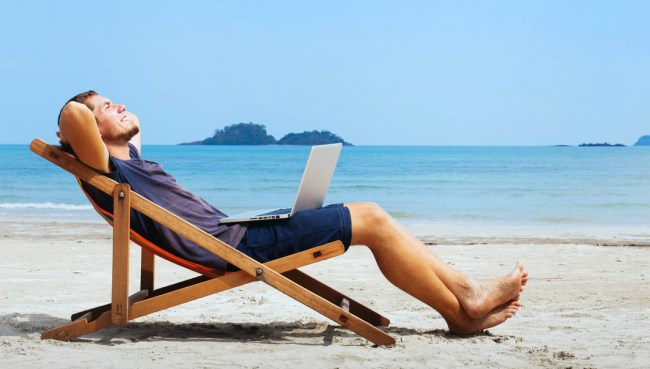 Americans spend the equivalent of 284 days of their life dreaming about being on vacation, according to a new study into the travel habits of 2,000 Americans.

The survey, conducted by OnePoll on behalf of Travelex, looked to uncover what inspires people to get out and travel, and how we go about making our travel dreams a reality.

What it revealed is Americans spend over 113 hours every year thinking about being on a beach or getting away from the daily routine.

With the average respondent seeing 2.4 vacation pictures on social media that makes them jealous every single day, or 891 every year, it’s no wonder that the jealousy eventually manifests into plane tickets.

But there’s a reason social media is often packed to the brim with beautiful stills of beaches, exotic locations, and people having more fun than you in general, as 36 percent of Americans admit they put on a show for social media so their friends know their lives are great.

14 percent say it’s “very important” that people know they’re living a fun life with a large chunk of those respondents, maybe unsurprisingly, falling within the 18 to 34 age range.

And while social media envy and FOMO (fear of missing out) definitely play a huge part these days in travel destinations, being bored of your daily routine is still the biggest contributor, with 58 percent saying they’ve taken a vacation to break up their normal day-to-day.

Settling into a dull daily routine can make anyone go mad with travel lust, which perhaps explains why the average American checks flight prices and deals at least weekly.

“Between work and personal lives most people have a very hectic day-to-day routine,” said Christine Buggy of Travelex. “Taking a vacation away from home is the only way to get some well-deserved rest, relaxation and quality time with family and friends.”

While some people may want to travel with the intent to party, go on an adventure, or learn a new language, 52 percent of Americans say “relaxing” is their top priority when it comes to picking out a trip.

And relax they do, as 71 percent saying they smile more on vacation. If you need more reasons to go on that trip, 69 percent also report they laugh more often on vacation, 71 percent feel less stressed, and one in four say they even exercise more while on a trip.

But traveling is not without its reservations, as 56 percent of Americans say money is their biggest concern while taking that much needed holiday.

And once you do finally book, what if something comes up and you have to cancel that expensive trip, as has happened to 40 percent of Americans? 34 percent of respondents say they buy travel insurance for this reason alone.

“Most people spend a considerable amount of time and money planning their vacation. An unexpected injury, illness, or misfortune can interrupt all the fun during your trip or even cause you to cancel,” said Christine Buggy of Travelex. “Unplanned events happen, and they can derail a vacation, leaving you with additional expenses or the loss of non-refundable payments. A Travelex insurance plan can help keep you protected against those unforeseen events.”