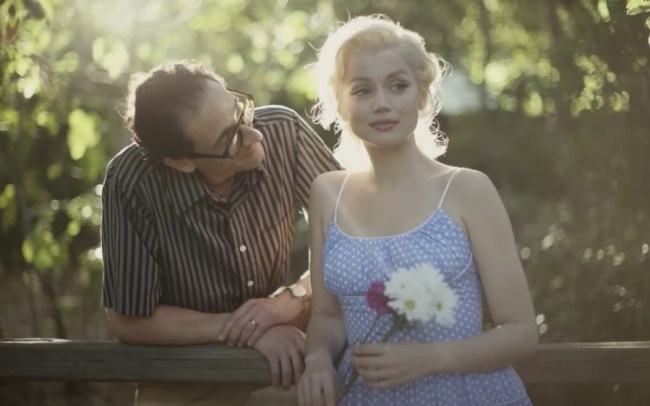 While the film has been expected to be an awards season contender — it’s premiering at the boujee Venice Film Festival in September, after all — the initial response from movie fans hasn’t necessarily been all positive, as some prospective viewers are confused by the fact that de Armas appeared to keep her Cuban accent for the film.

While de Armas’ appears to have the look of the legendary model and actress down, that doesn’t appear to be the case with the voice, as evidenced by the film’s first trailer. To his credit, though, director Andrew Dominik did say earlier this year that Blonde will likely “offend everyone.”

Some fans took to Twitter to voice their frustration with the directorial and acting choice, joking that Monroe “famously” had a thick Cuban accent.

Correct me if I’m wrong. Did Marilyn Monroe have a thick Spanish accent?

I never knew Marilyn Monroe had a spanish accent.

maybe Marilyn Monroe had a Cuban accent in real life too? i dunno i wasn't around back then. she could have sounded like anything

Marilyn Monroe did not speak with a Cuban accent. pic.twitter.com/ddsw63ClXV

I like Ana de Armas but I gotta admit I'm skeptical about her playing Marilyn Monroe… Her accent is still pretty obvious in everything I've seen her in.
It's not like Nicole Kidman or Saoirse Ronan who can completely disguise their native accent.

I was going to join in on the Marilyn Monroe/Ana De Armas accent discourse and then it dawned on me…I wasn’t watching that movie regardless so lemme mind my business pic.twitter.com/pVCFJLTmub

ana de armas coming from cuba knowing zero english in 2016 would be insanely proud of ana de armas playing marilyn monroe with accent and all in 2022 https://t.co/K3OpkZa3S5

de Armas could use a Russian accent for all I care — the trailer looked excellent so I’ll be seated for this movie as soon as Netflix kindly drops a screener in email inbox.