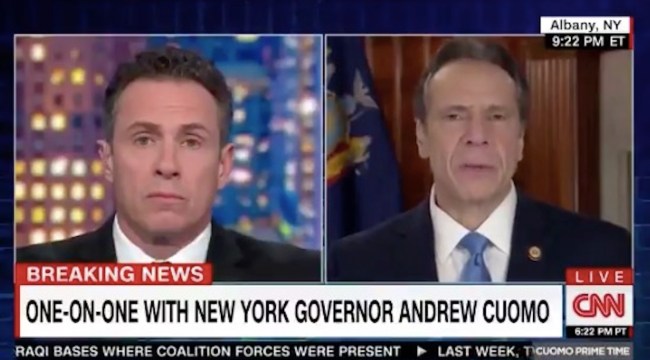 Leave your politics at the front door, folks — we aren’t here to talk about that. I don’t care if you think Andrew is a lib cuck or that CNN is fake news. We’re here to talk about brothers being brothers and family being family, no matter how old they are or what their careers entail.

Andrew Cuomo is the 62-year-old Governor of New York. His younger brother Chris, 49-years-old, is a journalist and news anchor CNN. Their father Mario was the Governor of New York from 1983 to 1994. Whether you love them or hate them, politics is in this family’s blood.

But regardless of how political or how famous the Cuomos may have become, they’re still exactly that: family.

They grew up under the same roof following the same rules. They get together for Christmas Eve and they argue over who’s taller. They debate, on national television, who their mother likes more.

This video of brothers Andrew and Chris Cuomo fighting ON AIR about their mom’s favorite child, calling their parents, and breaking curfew growing up is better than anything Shakespeare ever wrote pic.twitter.com/h7KF6pOdun

It goes without saying that this last week has been difficult for everyone: whether you’re a writer like myself, a politician like Andrew, or a TV host like Chris. But it’s little moments like these that remind us that no matter how much we may disagree and argue, at the end of the day, we’re really all the same: we’re brothers and we’re sons and we’re confident that Mom likes us the most.

Call your brothers, call your mothers, be a family, get through his together. That’s really all we got.