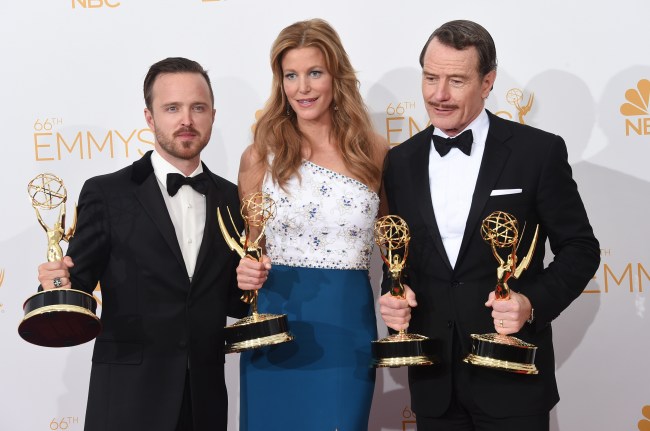 The majority of Breaking Bad fans decided early on that Walter White’s wife, Skyler, was the character to root against. Nagging and opposing a large-scale drug operation was inexplicably a greater crime than being a drug dealing murderer who still wears tighty whities. Poor Skyler’s most egregious crime was being a good wife to her cancerous husband and what did we do? Hate her for it.

This isn’t lost on Skyler, played by actress Anna Gunn. We should all feel like pricks because it has affected her self-esteem outside of the role, like in real life.

In a feature by Entertainment Weekly, Gunn admitted that the hate she got for her role in the show took a number on her.

“It shook me. As an actor, my job is not to always play characters who make everybody happy. That’s not interesting. In fact, characters that are more difficult in a way are more interesting. But when you are on a show that has become that big and people are identifying you so much with somebody that they dislike, you can’t help but feel like you get folded into it.”

The 49-year-old actress recalled the first time she felt the hostility from a Walter White sympathizer.

“It was fairly early on that a guy stood up and said, ‘Why is your character such a bitch?’” she recalled. “He was so clearly firmly with Walt, and thought Skyler was just this awful, nagging person. That was one of the first moments where it came right to me and it was shocking. I think we were all kind of shocked.”

According to Uproxx, Bryan Cranston said that Anna Gunn was “deeply affected” by the vitriol and praised his co-star for her ability to funnel that emotion “into her work.”

Gunn was able to transcend the perception of her character by understanding that the hate was just misguided affection for Walter and society’s perception of what a woman in her shoes is supposed to be.

“I was really glad that I went through it and that I learned what I learned,” she said. “Ultimately I realized this is not about me. This is not about me, Anna Gunn, and it’s really not about Skyler. It’s about the way people are connecting to [Walt]. It’s also about the way that people still hold on to, perhaps, older ideas of what a woman or a wife should be or how she should act or how she should behave. In the end, change isn’t always comfortable and isn’t always pleasant, but it’s good that it was brought to people’s attention and consciousness.”

With that said: Chill, Skyler. Put down the knife.