Anna Kendrick Taunts Ryan Reynolds After Beating Him For Teen Choice Award, Because That’s How She Rolls 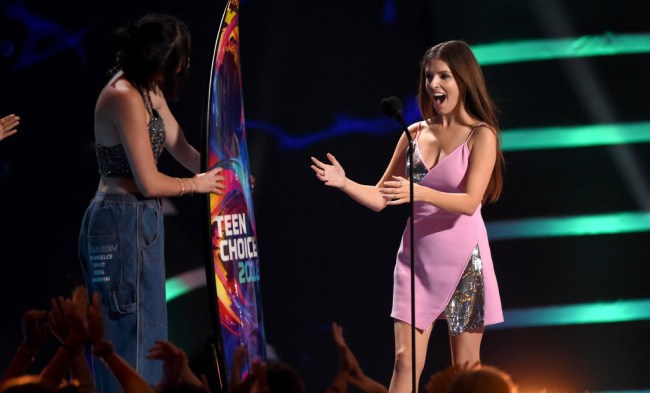 So did you watch the 2018 Teen Choice Awards Sunday night? Ha. I’m kidding. Although I do know that if you have kids around the tween age there is actually a chance that you did. Sorry.

For the rest of you that did something else with your life on Sunday night, the best thing you missed from the Teen Choice Awards happened thanks to one of our favorite actresses Anna Kendrick.

As you may or may not recall, Kendrick and Ryan Reynolds have had a fun little feud going ever since Reynolds’ wife Blake Lively roasted him while promoting her film A Simple Favor by saying, “Anna Kendrick is the hotter, female(r) version of my husband…so, would it reaaaally count as cheating?”

To which Kendrick replied, “So glad we’re finally taking this public. I let Ryan have Deadpool, he can give me this.”

Of course, Reynolds, being awesome at social media, commented back, “The most ambitious crossover event in history. I’ll miss you both. Tell my story.”

Speaking of being awesome at social media, Kendrick was nominated in the same category as Reynolds, “Choice Twit” (best celebrity on Twitter), at this year’s Teen Choice Awards and when she beat him, of course, she had to taunt him. (Chrissy Teigen, Kumail Nanjiani, Mark Hamill, and Mindy Kaling were the other nominees.)

“I have so much fun on Twitter, and I know that Mindy and Kumail and [others] were nominated, and also I know that Ryan Reynolds was nominated, so in your face, Ryan!” Kendrick told the crowd. “I beat you! Stay in your lane!”

Oh well, at least Reynolds still has his wife, as he said at Comic-Con about Anna Kendrick stealing her, “I know a lot of guys that would be fine with that, but not me. I would like to hang onto her. Yeah, please, let’s not do that. I mean, she’d be well taken care of with Anna, though. I think she’s got the goods, yeah, but no, access denied.”