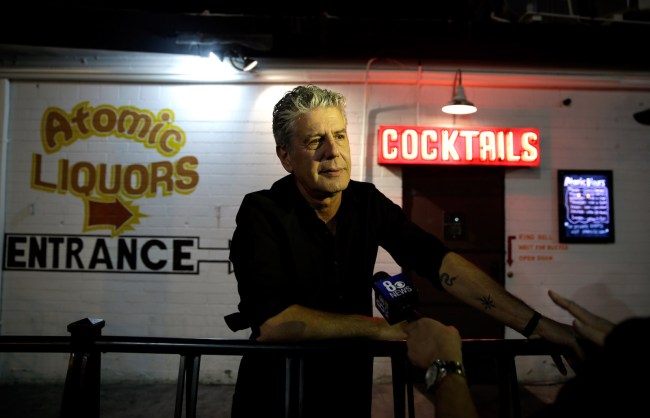 In October, hundreds of personal items belonging to chef, TV star and cultural icon, Anthony Bourdain, will go up for auction.

The estimated value of the lot is between $200-$400,000 according to the auction house in charge of the proceedings, Lark Mason Associates.

The auction items include paintings from Bourdain’s personal collection, books, manuscripts, items of clothing and a custom-made Bob Kramer chef’s knife. The knife is estimated to be worth around $6,000.

A few of the more compelling items on the auction docket include a mid-century Peter Lovig Nielsen desk, where Bourdain did most of his writing, a U.S. Navy bomber jacket the chef received after leaving Beirut during filming and in the midst of the Israeli-Lebanese conflict, and a silver and bronze sculpture of the Michelin tire man.

Bourdain passed away in June 2018.

According to the New York Times, sixty percent of the auction proceeds will go to Mr. Bourdain’s ex-wife, Ottavia Busia, and daughter, Ariane.

The remainder of the earnings will be donated to a new scholarship to the Culinary Institute of America.

The award will bare Bourdain’s name and will allow recipients to spend a semester abroad or to study international topics.

Bourdain graduated from the CIA in 1978. In 2017, he received an honorary Doctor of Human Letters in Culinary Arts, acknowledging “his importance as possibly the most recognizable food personality on the planet.”

The auction runs until October 30th. A full list of the auction items is viewable on the iGavel website.

For those interested in learning about man, and not just owning his belongings, there’s now a college course on being Anthony Bourdain and his show “Parts Unknown” is available to stream on Netflix.