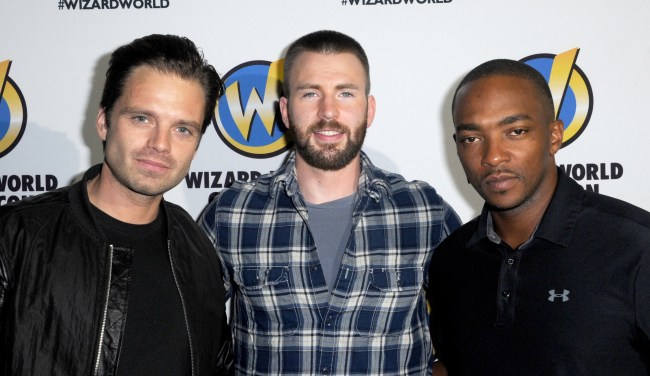 Chris Evans may or may not return at some point in the role of Steve Rogers, AKA Captain America, at least according to Avengers: Endgame co-director Anthony Russo. We probably won’t know about that until it actually happens, based on how secretive everything surrounding the Marvel Cinematic Universe is.

One thing we do know for certain with regard to Cap is that, for right now, Anthony Mackie has the role, going from being Sam Wilson, aka Falcon, to the new Captain America, just like in the comics.

Going into Avengers: Endgame, one of the big questions many fans had was who would wield Captain America’s shield should he get killed off, Bucky Barnes, played by Sebastian Stan, or Mackie’s Sam Wilson?

That’s because in the comics both characters at various points donned the red, white and blue spandex.

Each of them will be getting their day in the sun when Disney+ launches on November 12th and The Falcon and Winter Soldier debuts, but it’s Mackie who will get all the glory the next time Cap appears in a Marvel movie.

Over the weekend at Celebrity Fan Fest, Mackie addressed both how he found out he had been chosen to take over as Captain America, as well as a hint of how he plans on playing the role.

“We were shooting in Atlanta and Chris Evans had a bunch of us over to his house to watch a football game, because we all hate the Patriots and he loves the Patriots,” Mackie told the audience. “He and I go downstairs and he’s showing me the house and he’s like, ‘So are you excited?’ I’m like, ‘I mean yeah, it’s gonna be a football game. I love football, I watch football every week, but I didn’t know you were this into it.’ And he’s like, ‘No, about the script. You haven’t read the scene?’ I was like, ‘No.’ So he jumps up, runs out of the room and back in with the script and hits me with the script. He’s like ‘Page 85! Read it! Read it!’ And he sits there like a kid watching [me read it].

“So, it was a cool moment, with the fact that usually they sit you down, and it’s Kevin Feige and all the producers and they’re like, ‘You’re gonna do this’ and you’re like, ‘Oh, thanks!’ But it was a cool moment that I got to learn it from one of my dear friends, instead of somebody else.”

When pressed for more details on his reaction to finding out, Mackie said, “For me, it was an emotional moment. One, I love Chris. Chris is an amazing Cap. And I feel like, what he’s been able to do with that character, very few people have been able to do in any cinematic universe or span of films. Because he’s played Cap for A LOT of movies. To take that over, to be a part of that, the legacy of that, is a huge challenge. It’s something where a lot of people are going to expect me to be Chris Evans in the same suit, but a black dude. And that’s definitely not gonna happen.”

Later in the discussion, Mackie shared a few more stories about the MCU, including how he really wanted to play Beast in an X-Men movie (“I was very upset when I didn’t get cast.”), as well as a story about how he thought Dave Bautista killed Tom Holland on set one day.

“All of a sudden he does this jump, flying, punch kick move and literally, the stage shook,” Mackie explained. “And I thought he had hit Tom Holland and I was like ‘Oh my God, you just killed Tom!’ So I turn around and I see Tom like sitting there and am like ‘Dude, what are you doing?’ and Tom’s like ‘Calm down, he’s teaching me a move!'”

Mackie then explained how he was worried because Bautista is like a real fighter and he thought he legit performed the move on Holland.

“It was the scariest moment of my life. I thought he killed him,” Mackie admitted.

Listen to him, as well as Benedict Wong and Lee Pace, tell all their stories below.