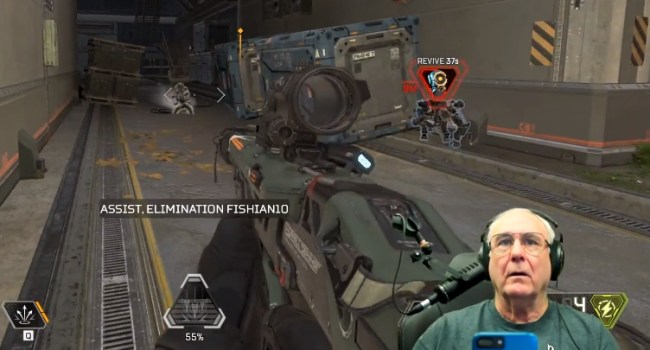 When you think about Apex Legends gamers who have huge amounts of followers on Twitch, a 66-year-old grandpa who “collects sea shells from all over the world” isn’t exactly the first thing that comes to mind. But maybe you haven’t heard about GrndPaGaming.

Twitch streamer GrndPaGaming became a well-known badass when a clip of him dominating Apex Legends went viral recently. The real-life grandpa of two, saved his team by taking on everyone with the Triple Take sniper rifle, all while throwing in some quality trash-talking for good measure.

According to GrndPaGaming’s Twitch profile, he is a 66-year-old grandfather who served in the U.S. Navy for over 20 years as a diver. Now he enjoys cooking and amateur astronomy.

However, grandpa is a bit beat up, which hinders his gaming skills. “Then there is a bum right hand with no feeling in the thumb and forefinger,” he wrote in his Twitch bio. “From the shoulders down I have no feeling so the use of mouse and keyboard are sub-par at best, and yes, I am a train wreck of a 66-year-old man.”

GrndPaGaming is also a cancer survivor, but still needs radiation treatments. “I am now a seven-year prostate cancer survivor and I’m now suffering from the side effects of the meds I need to take and the radiation treatments I went through,” he wrote. “I am disabled due to an injury I sustained while working. I have a plate in my neck which at times causes me great pain.”

“So, cut me some slack on the ‘he is a crappy player,'” GrndPaGaming wrote. “Try competing with no feeling in your hands and see how far you get in a game. I served 20 years four months in the Navy.”

RELATED: After Smashing Records, ‘Apex Legends’ Bans 16,000 Cheaters As It Positions Itself As ‘Fortnite’ Killer

But gaming grandpa doesn’t just rake up kills in Apex Legends, he is also an assassin in PlayerUnknown’s Battlegrounds.

GrndPaGaming also plays Armored Warfare, Battlefield, Doom, The Division, Fallout 4, League of Legends, The Witcher 3, World of Tanks, and World of Warships. His popularity of late for Apex Legends has brought him over 150,000 followers on his Twitch account.

Then there are his cooking videos, which aren’t quite as entertaining as his Apex Legends videos.

RELATED: The New President Of Nintendo Has The Last Name Of ‘Bowser’ And The Internet Can’t Deal