Arapaima, A Predatory Fish Native To The Amazon, Washes Up On Shore Of Florida River 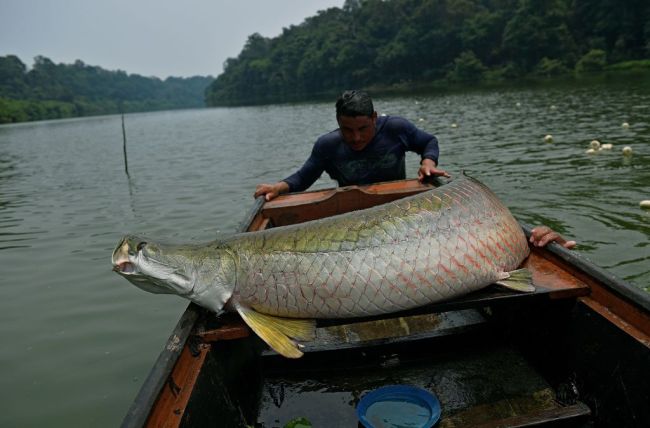 Florida is full of weird, scary, and potentially harmful critters, many of which are non-native species. Gigantic Burmese pythons are and Nile crocodiles are two of the more well-known non-native species that call the Sunshine State home, but now there’s a new predator in the mix, the arapaima fish.

The arapaima is the world’s largest predatory fish and apparently it’s made its way to Florida, which is quite odd seeing as how it’s native to the Amazon and the Essequibo basins of South America.

The dead arapaima washed up on the bank of the Caloosahatchee River and was found by Leah Getts walking through Cape Coral’s Jaycee Park. The Getts had no idea what type of fish it was, but after posting it to Facebook, someone was able to identify it.

“It was bigger than my 7-year-old. I thought that is nothing I’ve ever seen before. It was kind of white with a pinkish tail.” Getts told NBC 2.  “It had a huge kind of open bass looking kind of mouth. It didn’t look like anything I had heard of or seen before.”

Getts isn’t being overdramatic in saying the fish was bigger than her seven-year-old, arapaima can grow up to 10 feet in length and weigh more than 400 pounds. They’re also hideous-looking.

If you thought the gators, the Nile monitor lizards and the Burmese pythons weren't scary enough, meet #Florida's newest resident, the Arapaima, a favorite of #RiverMonstershttps://t.co/6EqHU8A151 #CapeCoral pic.twitter.com/QhKAQQB6hO

The fish is torpedo-shaped with large dark green scales with red markings. The scales are also extremely hard as they protect many, many layers of collagen fibers. The structure of their scales are similar to plywood; to say it’s a heavily-armored fish would be an understatement.

The arapaima don’t just eat other fish, either, they’re also known for eating birds and other mammals on the surface of the water among seeds and insects as well. The fish use a “gulper” feeding strategy, which means they open their mouths and create a vacuum that pulls in food objects. Arapaima then shred their prey thanks to their bony teeth and the roof of their palates. They also have the ability to attack prey above the surface by bursting out of the water.

John Cassani, an Ecologist for the Calusa Waterkeeper worries that the dead fish found in Florida could mean there are more in the area.

“The primary concern with Arapaima is that they would become established and reproduce naturally.”  Cassani told NBC 2.

There you have it, yet another species in Florida that you have to keep your head on a swivel for.