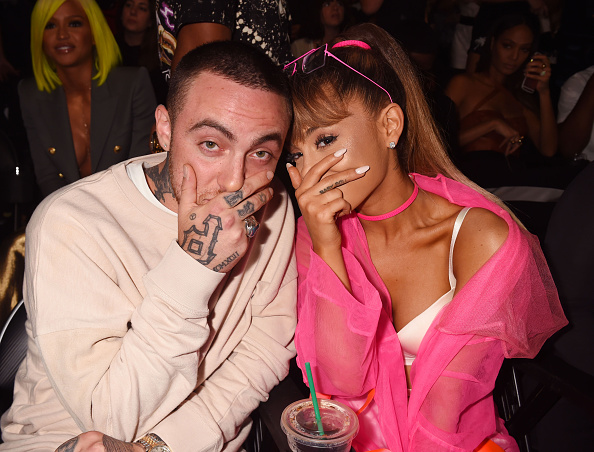 Hopefully, this is the last Ariana Grande and Pete Davidson tattoo post. Ever. The couple who had so much love that they got 17 tattoos dedicated to one another. The relationship crumbled after only five months. Que sera, sera. Now both celebrities are in damage control mode and are covering up tattoos.

After their unending love ended both have been covering up their dedication ink. Ariana covered up a Pete Davidson tattoo with a tribute to Mac Miller. Grande had the numbers “8414” inked on her foot, which was the badge number of Pete’s late firefighter father who was killed in the September 11th attacks. Now it says “Myron,” which is the name of Mac’s dog that she adopted after Miller died in September.

8418 tattoo💕
In June 2018, Ariana got the numbers ‘8418’ tattooed on her left foot in remembrance of Pete Davidson’s father, who was a firefighter and died in 9/11. It was his badge number. Pete has multiple tattoos with his fathers badge number. pic.twitter.com/JFtKbV5eab

Last week, both the Thank U, Next singer and Pete covered up tattoos that were dedicated to each other. Grande transformed a tattoo on her ring finger to a new black heart. Meanwhile, Davidson changed his bunny mask tattoo inspired from Ariana’s song Dangerous Woman.

Don’t get tattoos of people you’ve been infatuated with for five minutes because the eventual coverup tattoos look like garbage.

In related “Pete Davidson and Ariana Grande” news, the pop star confirmed the existence of “Big Dick Energy” (BDE) in her video for Thank U, Next. The new music video references chick flicks from the ’90s including Bring It On, Legally Blonde, and Mean Girls.

When the music video parodies the “bend and snap” scene from Legally Blonde, the package delivery guy doesn’t work for UPS, but he apparently works for “BDE.”

The video also references her ex-boyfriends and when it gets to Davidson, Ariana writes “HUUUUUGE” next to a photo of Pete. Previously when their relationship wasn’t in complete ruins, Ariana allegedly referenced the generous size of Pete’s manhood.

ariana really just confirmed the rumors that pete’s d**k is huge in the thank u next video huh lmfao she rly said ”i mean, he was cute n it was REALLY big“ to jennifer coolidge in the legally blonde scene & there was this other scene when she wrote about pete in her burn book pic.twitter.com/zigHT8N7H1