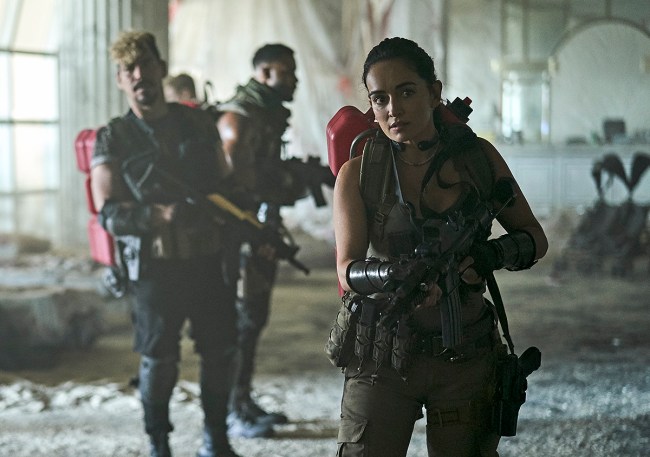 Army of the Dead has finally hit Netflix and put simply, it’s a blast. It’s the type of movie that needs — nay — deserves to be watched with as many of your friends as possible. It just adds to the experience. I watched a couple of weeks ago with my roommates when Netflix sent me my screeners and we had a ball. Jumpin’ all over the couch, shouting as if we were running for our lives in undead Las Vegas ourselves.

Warning: spoilers for Army of the Dead will follow.

Of all the screams unleashed during our viewing of Army of the Dead, though, the undoubted loudest of them all was when Ana de la Reguera’s Maria Cruz — mere seconds after sharing a heartfelt moment with Dave Bautista’s Scott Glenn — gets her head spun 180-degree Exorcism style. Not only is it wildly gnarly, but it’s wholly unexpected, especially for a genre famed for slow deaths.

In a recent interview with Collider, Ana de la Reguera spoke about the making of that scene, the make-up the crew used, and how it affected her personally:

“Because my face is supposed to be turned around, they literally put my boobs in the back and my ass in the front. They just changed my body and then they put this prosthetic with a thing [around my neck]. And I was in the prosthetic since 7am and I started shooting that around 1 and it was very uncomfortable and it was hitting right here, so that was my least favorite day because it was like carrying this thing.”

“It was so weird, because it was hitting something here and it was making me emotional. I don’t know why! So I just started crying in the middle of the day. And then they gave me some CBD gummies and then it was fine.” [via Collider]

Prior to the release of Army of the Dead — which is now streaming exclusively on Netflix — BroBible sat down with director Zack Snyder for a 30-minute conversation about the film, the DCEU, the psychology of Batman, and more, so make sure to check that out.