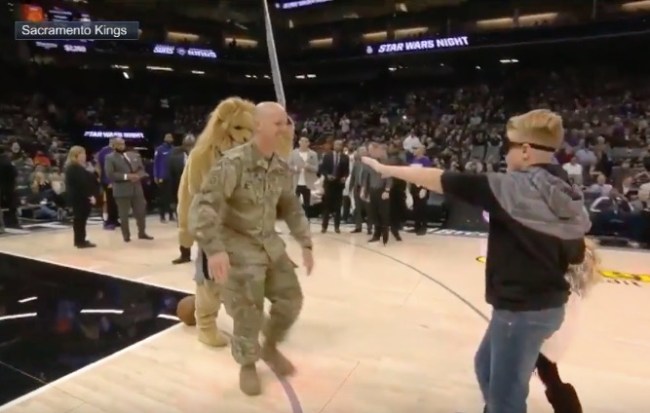 The kids were led to believe that they were going to be blindfolded and had to find the Kings’ mascot in order to win a prize. The crowd was going to help the kids out by cheering loudly or booing as the kids got closer/farther away from wherever the mascot was hiding. The second the blindfolds went on dad came running out onto the court after his 8-month tour in Afghanistan and went up to his kids, holding them both, and getting the hero’s welcome he deserves.

I’m sorry, but if you’re not at least a little bit choked up after watching that video then 2017 might have actually killed you inside. Seriously, if you can’t find at least a little extra gloss on your eyeballs after watching that hero reunite with his children after 8-months in Afghanistan then you might need to seek professional treatment because that’s one of the most touching clips I’ve seen all year. We’re 12 days away from Christmas and a few weeks from 2018, I defy you to find a more heart-warming video than this one. You can’t.