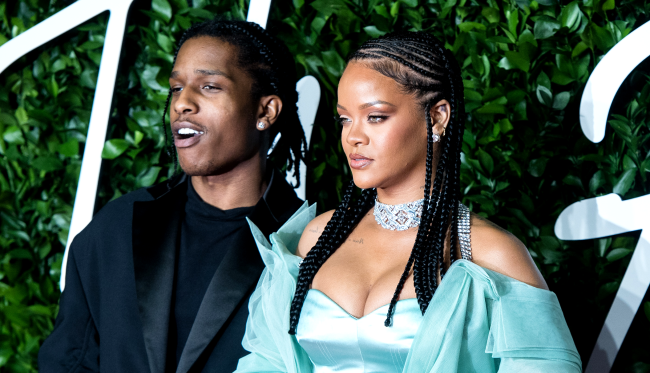 Long-rumored, but never truly confirmed, until now, the relationship between ASAP Rocky and Rihanna is of the romantic variety.

After months of dating rumors and appearing together at public events, they can now be officially annointed one of America’s newest power couples.

The 32-year-old rapper tells GQ in a new interview, despite knowing that he probably shouldn’t talk about her, Rihanna is “the love of my life.”

After eight years of speculation, ever since he opened for Rihanna on her Diamonds World Tour in 2013, Rocky finally expresses what being in a romantic relationship with the singer is like.

“So much better,” says Rocky. “So much better when you got the One. She amounts to probably, like, a million of the other ones. I think when you know, you know. She’s the One.”

The rumors surrounding their relationship really heated up around Christmas of 2020 when he and Rihanna were photographed in Barbados.

Rocky also revealed that he and the 33-year-old singer went on a cross-country road trip in a tour bus together from Los Angeles to New York City with stops in Texas, Memphis and other cities during the pandemic and that she has “absolutely” inspired some of the new music on his album, tentatively titled All Smiles.

“I think it’s important to have somebody that you can bounce those creative juices and ideas off of,” he told GQ. “It’s just a different point of view.”

When asked if he is ready to be a father, Rocky replied with a laugh, “If that’s in my destiny, absolutely. I think I’m already a dad! All these motherf—ers are already my sons — whatchu talkin’ ’bout!

“Nah, but like, I think I’d be an incredible, remarkably, overall amazing dad. I would have a very fly child. Very.”

Rihanna previously dated her boyfriend of three years, billionaire Hassan Jameel, before the couple broke up in January of 2020.