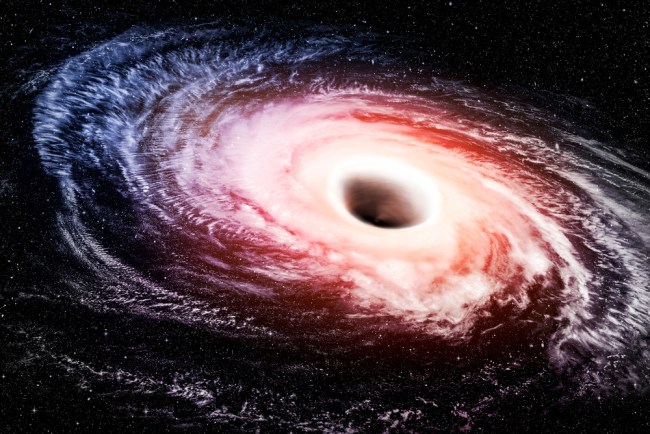 Astronomers have discovered the oldest supermassive black hole that is 800 million times bigger than the sun. One itsy bitsy problem — it shouldn’t exist. Scientists were able to find an extremely distant quasar, which is a bright object that consists of a supermassive black hole surrounded by an orbiting accretion disk of gas. “Quasars are among the brightest and most distant known celestial objects and are crucial to understanding the early universe,” said co-author Bram Venemans of the Max Planck Institute for Astronomy in Germany. There are much bigger black holes out there in the universe, but this is the furthest one that scientists have been able to detect. Only one other quasar has ever been found at this mind-blowing of a distance, but the newest quasar beats the previous record-holder, known as J1342+0928, by approximately 60 million light years.

The newest quasar gives off so much light that scientists believe that it must be at least 800 million times the mass of our Sun. Scientists can calculate the mass of its black hole engine based on the brightness of the quasar. NASA explains how scientists measure the distance of quasars:

The quasar’s distance is determined by what’s called its redshift, a measurement of how much the wavelength of its light is stretched by the expansion of the universe before reaching Earth. The higher the redshift, the greater the distance, and the farther back astronomers are looking in time when they observe the object. This newly discovered quasar has a redshift of 7.54, based on the detection of ionized carbon emissions from the galaxy that hosts the massive black hole. That means it took more than 13 billion years for the light from the quasar to reach us.

The black hole is so wildly distant that we observe it from a time when the universe was only 690-million-years-old since being created by the Big Bang. Researchers estimate that the light from this distant quasar has been traveling towards us for more than 13 billion years. Here’s the crazy part that has baffled scientists. Astronomers believe the Big Bang or the beginning of time happened 13.8 billion years ago. So how did this matter-devouring supermassive black hole get so ginormous in such relatively little time since the beginning of time?

Forbes tries to answer how this black hole got so gargantuan in so little time:

It’s possible that it exists in a rather dense region of space. Having lots of matter around would make it easier to grow quickly. But that isn’t enough to solve the mystery, because the faster a black hole consumes matter, the more light the matter would emit, and that pressure of light and heat would tend to push matter away from the black hole. It’s known as the Eddington limit, and it puts an upper bound on how fast a black hole can grow. To reach 800 million solar masses in such a short time, the black hole would have to consume matter fairly close to this limit.

So this discovery is like seeing the dawn of creation about 13.8 billion years ago. This is so much to unpack on a Thursday night or any night for that matter. Eduardo Banados from the Carnegie Observatories equated seeing the quasar is like seeing a baby photo of the universe when it was just 5% of its current age. “It would be like seeing photos of a 50-year-old man when he was 2 1/2 years old,” according to Banados. “This discovery opens up an exciting new window to understand the early universe.”

“The new quasar is itself one of the first galaxies, and yet it already harbors a behemoth black hole as massive as others in the present-day universe,” said co-author Xiaohui Fan of the University of Arizona’s Steward Observatory. This new quasar was born when the universe was emerging from a so-called Dark Ages when “stars and galaxies were first appearing and their radiation ionizing the surrounding hydrogen gas to illuminate the cosmos.”

“This particular quasar is so bright that it will become a gold mine for follow-up studies and will be a crucial laboratory to study the early universe,” Banados said. “We have already secured observations for this object with a number of the most powerful telescopes in the world. More surprises may arise.” Understanding quasars and black holes can help us decipher astrophysics as well as how the universe was formed.

The Carnegie’s Magellan telescopes in Chile, the Large Binocular Telescope in Arizona, the Gemini North telescope in Hawaii, and observatories in the French Alps all contributed to the study. The scientists posted their findings in the Dec. 7 issue of the journal Nature. Here is an artist’s rendering of what the massive black hole may look like. Are you feeling insignificant and small yet?

Scientists recently identified the farthest super-massive black hole ever discovered. It’s voraciously devouring material at the center of its galaxy — a phenomenon called a quasar whose light took 13 billion years to reach Earth! Get the details: https://t.co/kkcvbdvjGX pic.twitter.com/YdpNhZGrdl