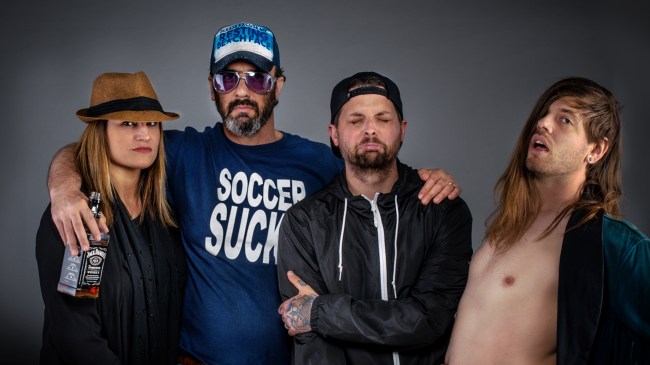 We’ve all heard the term “indie” band, yet many aren’t quite sure what it means. In short, it’s simply bands producing records through independent labels and includes a wide pool of acts like Guster, Pavement, Yo La Tengo, Vampire Weekend and the list goes on.

Underground music in America is littered with bands beloved by throngs of passionate followers, yet not quite on the radar of the mainstream public. It’s peculiar in that some very good acts can book 10,000-seat theaters in Europe yet only manage a tour of house parties in the U.S.

This is especially true in country music where traditional radio plays artists like Luke Bryan, Jason Aldean, Thomas Rhett and Carrie Underwood over and over and over again. But Grammy award winners like Sturgill Simpson and Lyle Lovett — or alt-country mainstays like Jason Isbell, the Turnpike Troubadours, Whiskey Meyers and Sun Volt — can’t seem to crack the FM dial.

One of these acts you most certainly have never heard of Atomic Junkshot. The band sits a few levels beneath underground status, somewhat by design, billing itself as a “marginally marginal country rock band.” The group also claims to have been “called ‘the voice of an utterly f*cked generation’ by Rolling Stone magazine, hailed as ‘the worst God damned thing since chlamydia’ by former Iranian President Mahmoud Ahmadenijad and noted as ‘quite the piece of shi*’ by Judge Judy.”

Spend a few minutes on the band’s website and you’ll quickly realize Atomic Junkshot is equal parts music and comedy. But you’d never guess humor is a mainstay by speaking with the band’s co-founder, lead singer and rhythm guitarist, Lon Magenta.

“Asshole DJs in the mainstream like Bobby Bones refuse to recognize real f*cking music like us today,” he notes in between sips of an almost comically-oversized bottle of Jack Daniels. “They want to ignore us in the non-traditional country space because we’re not playing some bullshit, bubble-gum-pop music backed by synthetic beats or over-sexualizing ourselves like Maren Morris. Seriously, Colt Ford and Sam Hunt suck balls and get played on radio while Sturgill or Wheeler Walker or Dr. Teeth and the Electric Mayhem Band can’t get a minute outside of Sirius’ Outlaw Country.”

But don’t write these guys off as just sophomoric jokers. There’s biting social commentary and method to the madness which is on full display in the band’s hyper-populist Americana anthem “American Solute”:

I’m an American through and through,
Like Jesus Christ and Scrappy Doo.
I piss eagle dust and I shit out freedom,
I bleed red, white and blue.

“I’m telling you man, Jesus Christ is a goddamn American hero,” Magenta said into the mic when introducing the song during a recent show in St. Louis, with no hint of irony.

All things music and comedy being subjective, Atomic Junkshot is a rather good band, but the bigtime has eluded them thus far.

“We had the chance to open for Tyler Childers who we totally dig, but we passed because he’s a Ginger and Lon is really scared of people that resemble that dude who played the clown in ‘It’ — Bill Skarsgård,” says lead guitarist Denzel Whitewell. “I told Lon that Tyler wasn’t a clown but he wouldn’t listen. Just really scared him. Big mistake and we learned from it. If Tyler or that drug addict kid from the Partridge Family or any other Ginger ever wants us to open up again – we’ll definitely do it.”

Irrational fear of clowns aside, Atomic Junkshot’s story began as a songwriting partnership between Magenta and Whitewell hatched in a St. Louis-area high school. The two were smitten with a female student who loved Hank Williams, Jr., so they decided to drop out and pursue music stardom as a means to get laid. 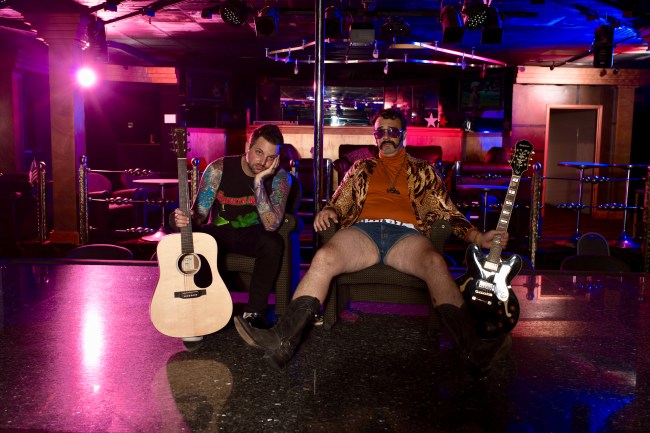 “I think it was somewhere between like 1976 and 1989 or so,” Magenta says vaguely. “And we just walked out of the 11th grade and never looked back. We began pretty humbly by playing on streets and under bridges. But our ass-kicking greatness quickly exploded into a raging cauldron of musical face-melting excellence and we began racking up more fans than that worthless suck-ass Bon Iver.”

The band spent its first decade on the road drawing inspiration from “three-named, asshole-to-everyone singers like Roger Alan Wade, David Allan Coe, Wheeler Walker, Jr., Sarah Jessica Parker and Kermit the Frog,” as Magenta puts it. But then he and Whitewell realized they needed to broaden Atomic Junkshot’s sound and added backing vocalist J. Giles and drummer Joey Baals to round out its core.

“We had to evolve,” Whitewell said. “We couldn’t just be Lon and me because he’d drive me fucking insane. Plus, we needed depth, layers, weed money, and just more than we had. So we found J. and Joey who fit what we do really well. They got us from day one and Joey always has weed money.”

But still, the nagging question: Why has no one heard of these guys? Easy answer: You must not spend much time in gentlemen’s clubs, because that’s where Atomic Junkshot plays most of its gigs coast-to-coast.

“Really miss ‘The Ti*ty Tamer’ up in Fargo,” Magenta sighs. “It closed but what a gem. Sweet folks and tremendous grilled cheese sandwiches.”

If Atomic Junkshot hopes to reach its goal of music stardom set forth by Whitewell and Magenta, it has a long way to go. But despite its lyrical foundation, the band is no joke. And through it all, in spite of its underground status, Atomic Junkshot is focused on sharing a unique brand of comedy-laced country rock with as many people as it can.

“Coming to a whorehouse near you,” Magenta notes. “And tell Bobby Bones to pull his head out of his ass and give some love to those in the business who really deserve it. Oh, and let Elizabeth Cook know I want to make out with her.”