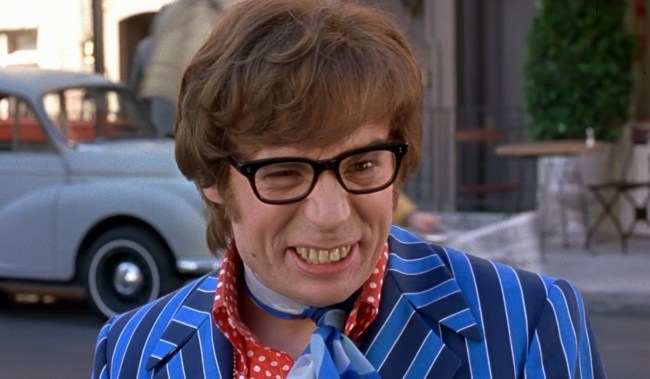 After bursting onto the scene thanks to his standout performance on Saturday Night Live, Mike Myers had one hell of a run in the 90s and beyond.

He first established himself as a bankable star in Wayne’s World thanks in no small part to one of the most iconic scenes in the history of cinema.

In 1997, he started yet another franchise in the form of Austin Powers, the infinitely quotable send-up of the James Bond films that spawned a couple of sequels that did what they could to live up to the original as well as a Ludacris song I’d totally forgotten about until now.

Unfortunately, in 2008, Myers inadvertently ended his acting career by deciding it would be a good idea to release The Love Guru.

He’s been fairly quiet since then, but now, the man responsible for introducing “shagadelic” into the modern lexicon (seriously, it’s in the dictionary) says he’s ready to make a new Austin Powers movie.

According to CinemaBlend, Myers has revealed it might just be a matter of time until we see the International Man of Mystery gracing the big screen once again:

Well you’re gonna see Dr. Evil soon, somewhere in the culture. But the movie, you know I’ve had three kids under the age of 7.

They take a long time to write, they always have. Jay [Roach]’s been super crazy. He’s doing a fantastic movie right now that he’s working on. But… it’s looking good.

Based on the number of people I know in Los Angeles perpetually working on their screenplay, merely having a script in the works probably means we’re still quite a ways away from actually seeing a new Austin Powers movie in theaters.

Comedies sequels made 15 years after the previous installment also don’t exactly have the best track record but that doesn’t mean I’m not holding out a little bit of hope for this one.