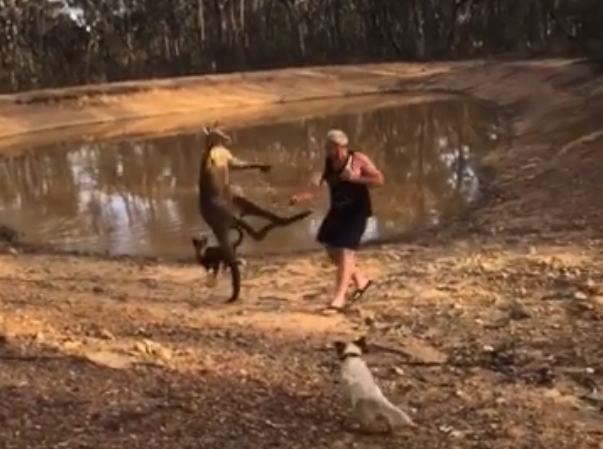 We haven’t seen a fight between a human and a kangaroo for over TWO years. TWO whole years. Australia, what are you doing over there? Human vs. kangaroo fights is your best export in the eyes of many people. We FINALLY get a new man versus kangaroo fight and let’s just say that this round went to the animal kingdom.

The kangaroo and human fight from 2016 pitted a man who was rescuing his dogs from the marsupial who had one of his pooches in a chokehold. The protective dog owner squared up and punched the kangaroo right in his kangaroo face. Why the long face kangaroo? While humans won that battle, the kangaroos have jumped ahead in the latest interspecies boxing match.

We take you to Bendigo, Victoria, in Australia where another man attempted to confront a kangaroo who was not happy with two family dogs at its watering hole. The bloke decided to not ask anyone to hold his beer and approached the kangaroo with brewski in hand in the Australian Outback. Before he could say “didgeridoo” the kangaroo hopped up on its tail and kicked the man with both of its clownshoe-looking feet.

Bree Tuohey captured the confrontation and shared the moment her dad was knocked to the ground by the flying kick on Facebook. The father may have lost the roohaha, but the dad was able to save his beer in the kangaroo attack. Despite being sent flying and falling on his back, the man didn’t spill his brew after getting his ass kicked by the roo.

So while the kangaroo won the fight, the man can say that he still has a cold beer to drink after the clash. The kangaroo is still drinking that dirty pond water. Who’s the real winner here?

Here is the kangaroo vs. human fight from 2016, when the man didn’t lose to a jumping deer and embarrass the entire human species.