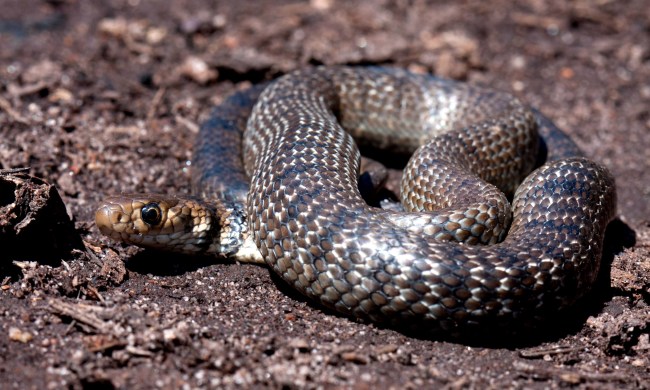 In the most Australian story you’ll see this week, Jimmy Canhan of Gladstone, Australia was pulled over recently by police for speeding for going 76 mph in a 60 mph zone after fighting off and killing a deadly eastern brown snake with a seat belt and a knife as he was driving down the road.

The 27-year-old Canhan said about the incident, “I was just driving at 100 (62 mph), and I just started to brake. And the more I moved my legs… it just started to wrap around me. Its head just started striking at the (driver’s seat) chair, between my legs.”

In actuality, Jimmy was going 123km/h, but since he had just been fighting off a lethal snake he probably, and understandably, lost sight of the speedometer. Not to mention the fact that he thought he had been bitten and believed he was minutes away from dying.

Although the traffic officer had heard his fair share of excuses for speeding, he soon realised this was not just another colourful tale and promptly sought medical assistance.

Paramedics attended the scene and it was determined that Jimmy had not actually been bitten by the snake but was certainly suffering shock from the ordeal.

“It was pretty terrifying, I’ve never been so happy to see red and blue lights,” Jimmy said.

“Brown snakes have unusually fast-acting venom and can kill within 15 minutes,” said snake expert Bryan Fry, an Associate Professor at the University of Queensland.

“I just had to calculate my own survival, it was just the primal instinct that came to me,” said Canhan. “I had no other thoughts in my head but get this thing out of here.”

While eastern brown snakes are protected under the Nature Conservation Act 1992 and it’s illegal to injure or capture them in Australia, Queensland Police decided to cut Jimmy some slack, calling this a “unique situation.” He also wasn’t ticketed for speeding.