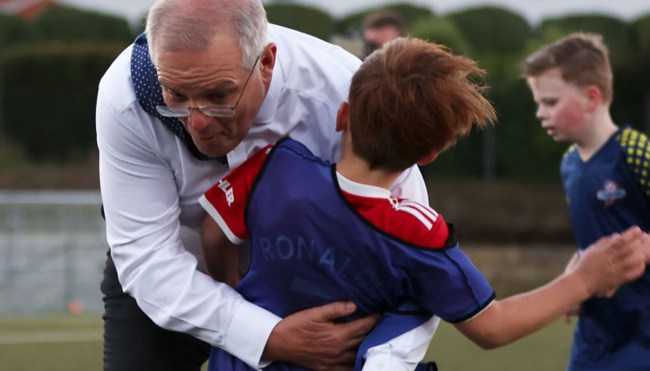 The sport that Americans call “football” doesn’t really have much in common with the athletic activity the vast majority of people on the planet refer to as “football,” but they do share a few similarities as far as terminology is concerned.

“Punt” is probably the one word that unites the two pastimes more than any other based on both the mechanics involved and the end result. You’ll also hear the announcers covering both sports utter “tackle” on at least a few occasions when you tune into a game, but the plays they’re referring to couldn’t be more different.

For the uninitiated, a soccer tackle involves a player trying to steal the ball from an opponent by boxing them out or sliding into their path. Those attempts can occasionally result in athletes writhing around on the ground in pain, but it’s safe to say they don’t tend to inflict the same kind of damage as the vast majority of tackles that routinely occur during an NFL game.

Australian Prime Minister Scott Morrison may have temporarily forgotten which type of football he was playing during a campaign visit to Tasmania on Wednesday based on what unfolded when he took the field with a group of kids for a casual game of soccer.

According to Sky News, Morrison’s stop at Devonport Strikers Football Club took an amusing turn after the PM got a bit too overenthusiastic in his attempt to track down the soccer ball and inadvertently tackled an eight-year-old identified as Luca Fauvette to the ground.

The PM just accidentally bowled over a kid while playing soccer in Tassie. @9NewsAUS pic.twitter.com/WhUAZHWpr9

Both players quickly bounced back up following the accidental collision, and Morrison—who checked in with Luca and his mom to confirm he was alright later that night—joked about the misstep by admitting it was a” bit of a rugby tackle.”