Autonomous Robots Can Now Perform Surgery Without Help From Humans, And Do It Better 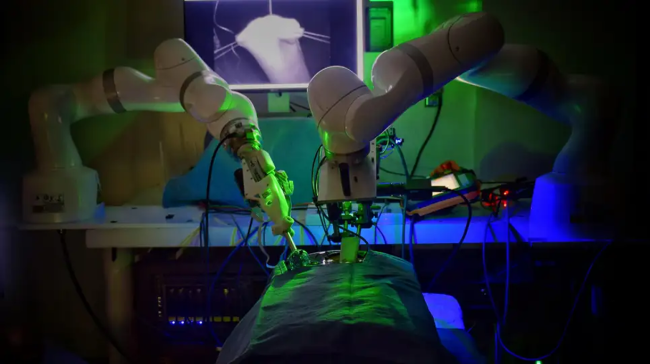 A new autonomous surgical robot at Johns Hopkins University in Maryland just performed keyhole surgery without the assistance of humans.

The Smart Tissue Autonomous Robot (STAR) performed intestinal anastomosis, the joining of two ends of intestine after a section is removed, on four pigs, with nominal human interaction.

“STAR is the first robotic system to plan, adapt, and execute a surgical plan in soft tissue without human intervention,” Axel Krieger, an assistant professor in mechanical engineering at Johns Hopkins, told Gizmodo.

Not only that, according to the report published in Science Robotics this week, the robot’s suturing and stitches were said to be more accurate and consistent than that seen in human-performed operations.

The robot performed the surgery on four pigs, carrying out 86 stitches in total. Two-thirds of the time, the robot placed the stitch autonomously, while the rest of the time it had to be guided into place manually before attempting the stitch again.

When the tissues were examined one week after surgery, the results were comparable to those achieved by human surgeons. The operation is particularly sensitive because any leak can cause catastrophic complications.

“Once you open the body, everything kind of moves inside the patient so you can’t plan ahead of time,” said Justin Opferman of John Hopkins . “If you’re doing soft tissues like intestines, as soon as you touch it, it moves out of the way. So you need to constantly be updating the robot’s plan to figure out what it needs to do and how to complete the task.”

Opferman added that this particular trial is the first step towards fully autonomous surgery in humans. However, autonomous robots still have much to learn, as Krieger explained to Gizmodo.

For the foreseeable future, though, STAR and similar robots will continue to play assistant to human surgeons, rather than take over completely. But even this could be an important step forward for making surgeries safer, by allowing surgeons to better standardize tricky operations like an anastomosis, a task that’s performed over a million times in the U.S. annually, according to Krieger. Krieger and his team also hope that systems like STAR can revolutionize other difficult soft tissue procedures such as tumor resections. And they envision a future where “autonomous robotic surgery systems could help treat patients outside of a normal hospital settings, for example, in trauma situations on the way to the hospital.”

Currently, the plan is to train the robot to carry out incrementally larger portions of an operation, until it can perform the entire surgical procedure by itself.

Opferman said human trials where these robots perform part of a surgery are hoped to begin sometime in the next five years.