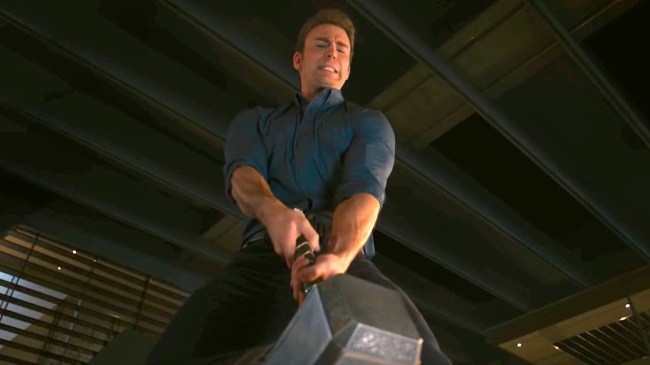 While Avengers: Age of Ultron is widely considered to be one of the weaker efforts in the Marvel Cinematic Universe, it does include a quite entertaining, and ultimately telling, scene that features the Avengers kicking back and having a few drinks.

Hanging out at the postgame of a party at Avengers Tower, Tony Stark, Steve Rodgers, Thor, and the rest of the gang are putting down some drinks and just choppin’ it up — there just like the rest of us, guys!

Apparently playing the superhero version of a drinking game, Earth’s Mightiest Heroes attempt to lift Thor’s notoriously unliftable hammer Mjolnir to no avail. Until Steve Rodgers steps up to the plate, as he gets the godly hammer to slightly budge, but still not picking it all the way up.

Then, years later in Avengers: Endgame, in a movie filled with many massive fist-pumping moments, arguably the biggest of them all was when Captain America finally wields the fuck out of Mjolnir during the film’s big battle for the fate of the universe against Thanos.

And according to the directors of Avengers: Endgame — Anthony and Joe Russo — this is a trick that Cap’s had up his sleeve for some time now.

“He always could,” Anthony Russo said when asked about Captain America wielding Thor’s hammer during a recent Reddit AMA. “Our interpretation of the famous scene in Ultron was that when he realized he could pick up Mjolnir he quickly chose not to, because he didn’t want to embarrass Thor.”

I mean, talk about a power move in not wanting to embarrass the God of fucking Thunder. Serious big dick energy from our boy Steve Rodgers.

In addition to Cap’s big “HELL YEAH!” moment, the Russo brothers also touched on a bunch of other interesting topics that any fan of the MCU will enjoy, via CNET:

About the sequence of time portals:

“We spent a lot of time in the edit room playing around with the sequencing of the portals,” Joe Russo said. “We probably didn’t lock that section of the movie until about a month before the film was in theaters. We always wanted Sam to be the first one to communicate with Cap via his comm, and Sam was last in Wakanda, so logically the first portal that would open would the Wakanda portal. And the first person that would logically walk through a portal from Wakanda would be the King himself, bringing his army once again to the defense of Cap and the world.”

The most difficult day of shooting for Endgame?

On Tony’ Stark’s story arc being so tragic:

“At this point we have been involved with just about every characters arc in the MCU,” Joe said. “But in respect to all of the characters that aren’t Cap, I think Tony’s arc is incredibly tragic and unquantifiably heroic. As a father myself, contemplating the notion of being presented with the choice of saving the universe at the cost of losing your life, and knowing that your child would lose their father, and that your wife would lose a husband, is painfully difficult to comprehend. It’s a choice that only the greatest amongst us could make.”

About that cut Avengers kneeling scene:

“We found the Avengers kneeling scene incredibly emotional as well, but when played in the run of the film,” Joe and Anthony said, “it felt incredibly similar to the moment when all of the heroes stood on the shore at Tony’s funeral, paying their respects to him outside his home. The two scenes, when in the film together, seemed to fight one another, and created a repetitious ending.”

The importance of Vormir and the Soul Stone:

“For the centerpiece of Vormir where you retrieve the stone, we referenced ruins that were used for human sacrifice as an inspiration,” Anthony Russo said. “The choice to keep the soul stone out of the storytelling wasn’t entirely ours, any of the other Marvel storytellers could have gone to that stone at any opponent. But, we were thrilled that the stone had remained a mystery in the MCU and that we were able to use it for such a surprising purpose.”

Plans for future director cuts of their movies?

“We have always released the version of the movie we wanted to, so you would never see a director’s cut of a Russo Brothers’ Marvel movie because you have already seen it,” Anthony said.

Which superhero movie that is not currently in the MCU they would love to direct:

The next film in the Marvel Cinematic Universe is Black Widow, which kicks off the MCU’s “Phase 4” on May 1, 2020.