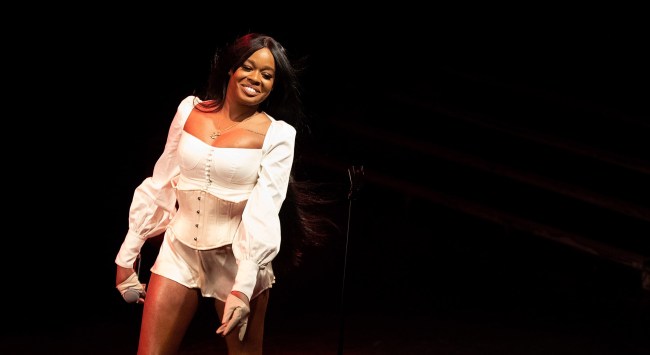 Rapper Azealia Banks is certainly no stranger to controversy.

Last year she claimed she slept with Dave Chappelle and threatened to ruin his marriage in a very bizarre rant.

Then there was the time Banks called out Rihanna for having a “sex addiction” and tweeted her phone number.

She also shared a video that showed her cleaning out a closet covered in blood and feathers where she sacrificed chickens.

So when she posted a couple of videos this week on Instagram that supposedly showed her digging up her dead cat and cooking it, should anyone really have been surprised?

Yes, actually. Because what the f–k?

“Lucifer 2009-2020. My Dear kitty,” she wrote on one of the livestreamed videos. “Thank you for everything. A legend. An icon. Forever a serval serve.”

The videos in question show Banks digging up her dead cat Lucifer, which supposedly died three months ago and then boiling it. Later she showed her cat’s skull hanging on the wall. Then she moved it to whatever on Earth this is…

So was Banks’ little performance real or was she just trolling? Did we mention she once had a closet covered in blood in her house?

Knowing her, it might have been legit. She appeared to be boiling the skin off the cat so she could use its bones for one of her many odd rituals.

Either way, it’s weird AF and reactions by her followers and others echoed that sentiment.

Azealia Banks really dug up her dead cat and cooked it on Instagram Live. pic.twitter.com/VAR5d9x19v

When you go to Azealia Banks house for dinner and you feel whiskers in your throat pic.twitter.com/x7h1SewzNG

i close twitter for 3 hours and come back to azealia banks cooking her dead cat pic.twitter.com/HpYjSXNJbE

Me checking to see why Azealia Banks is trending. pic.twitter.com/lJPw6BjvCp

Me after finding out why Azealia Banks is trending 💀 pic.twitter.com/xB2Z9RSonK

Boiling her dead cat’s skeleton so that she can take remnants of it with her because she is moving is arguably one of the least offensive things Azealia Banks has ever done.

If you really want to see Banks digging up her dead cat, please do feel free to click here.