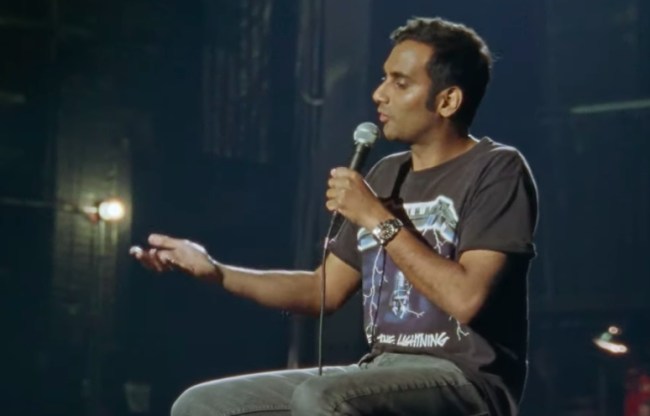 Back in January 2018, an online publication called babe.net, a now-shuttered site that published articles like “What Your Favorite Sex Position Says About What Kind of Hoe You Are” and whose writer once asked Jonathan Cheban what Kim Kardashian’s butthole tasted like, attempted to become players in the MeToo movement by publishing an account from a woman who had an uncomfortable sexual experience with Aziz Ansari.

The title of the piece by the anonymous victim: I went on a date with Aziz Ansari. It turned into the worst night of my life.

The piece accused Aziz of pressuring her into sexual activity following a date, but the content of the article came off more self-indulgent than damning. It went super-viral and sparked a debate about consent and the externalities of the MeToo movement when accusations become less factual and more abstract.

After the accusations, the 36-year-old comedian faded out of the spotlight. But, in his new Spike Jonze-directed Netflix special dropping Tuesday morning titled Aziz Ansari Right Now,  Ansari begins the set by addressing his feelings on the matter.

“You know, I haven’t said much about that whole thing, but I’ve talked about it on this tour, ’cause you’re here and it means a lot to me,” Ansari said. “I’m sure there are some of you that are curious how I feel about that whole situation.”

I always think about a conversation I had with one of my friends where he was like, ‘You know what, man? That whole thing made me think about every date I’ve ever been on.’ And I thought, wow! That’s pretty incredible. If this made not just me but other people be more thoughtful, then that’s a good thing, and that’s how I feel about it.”

Ansari goes on to say that while this was “not the most hilarious way to begin a comedy show,” he wanted to clarify his stance before hitting the lighter topics. He was then given a deafening applause by the Brooklyn crowd.

Here’s a clip from the special.