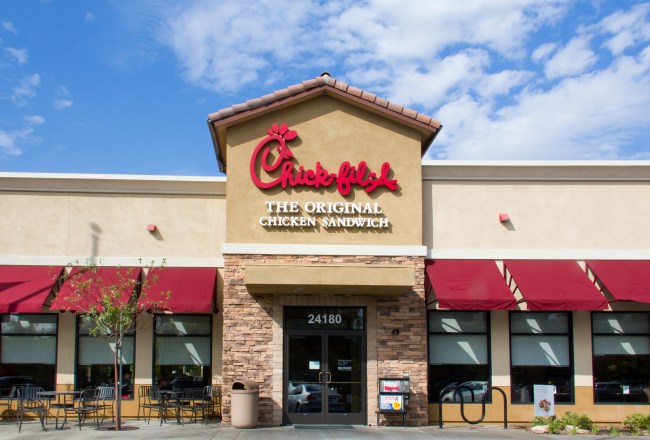 Lifehack: If you want to be the best parent you can be, try like hell to give birth to her in a fast food restroom. If you can get over the smell of diarrhea and used heroin needles in the trash bin, you could be setting your child up for a lifetime of success.

One San Antonio couple will agree.

On Tuesday night, Falon Griffin began experiencing  intense contractions so she and her husband, Robert, jumped in their car and headed to University hospital. Little did they know at the time, but Falon would be giving birth on the floor of a Chick-Fil-A bathroom.

According to KSAT, Falon needed to use a restroom so badly, they stopped at a Chick-Fil-A en route to the hospital. The chicken chain was closed, but the couple banged on the door and begged the staff to use the bathroom.

“I’m about to dial 911, I open the door and she’s just screaming,” Brenda Enriquez, the Chick-fil-A store director, told KSAT.

Enriquez grabbed towels and called for Robert to help deliver the baby. As you can imagine, he was shitting himself, especially because both Falon and the baby were considered high-risk during the entire pregnancy. Regardless, Robert played the hero and helped untangle the baby’s umbilical cord that was wrapped around her neck.

“I stopped her at her shoulders because I saw what looked to be a white collar around her neck, and it was the cord that had been wrapped around her neck twice,” Robert Griffin said.

Falon and Robert delivered the healthy baby, Gracelyn, right before EMTs showed up. All three are currently in a San Antonio hospital doing just fine.

ANNNND as a sweetener, Chick-fil-A has offered the baby food for life and a guaranteed job at 14 years old.The franchise owners are already helping plan her first birthday party at Chick-Fil-A.

If that child isn’t 400 pounds before he Sweet 16, she didn’t maximize her privilege.