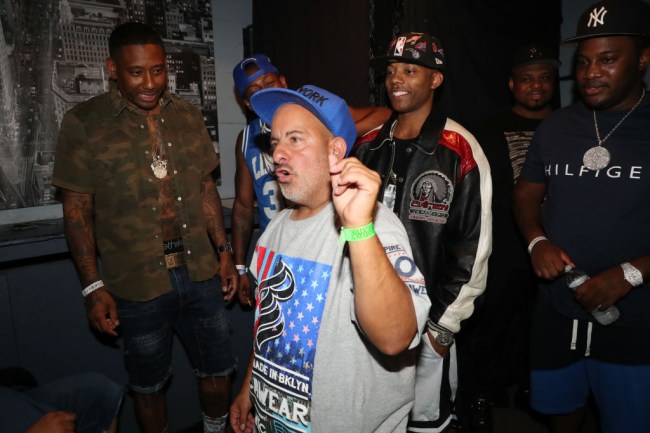 In case you weren’t sure, the Bagel Boss guy AKA Chris Morgan might not be ready for the insane spotlight that he has carved out from his viral popularity.

The Bagel Boss guy AKA Chris Morgan has made headlines once again, but this time it was for his ridiculous antics. Unfortunately for the Bagel Boss, he ended up in handcuffs following his latest folly.

On Sunday, Morgan was restrained by police officers at Bay Shore Marina in New York. Allegedly, Bagel Boss got into an altercation with another gentleman. Police stormed the area after complaints of a “disturbance” and arrested Morgan. Once cops arrive at the situation they instruct Morgan to lay on his stomach and get his hands behind his back.

“Get on the ground!” a cop is heard telling Morgan on video. “F–k you, you a–hole!” Morgan replies. He finally complies, but verbally complains throughout the situation. mouthing off throughout the whole ordeal.

After the Bagel Boss had a meltdown, he was placed in handcuffs and he will go through a psych evaluation. No word on if the 5-foot-tall internet sensation was arrested or not. This isn’t the first public meltdown that bagel boss guy from Long Island has suffered. That’s pretty much how he gained popularity.

Of course, Chris has been riding his 15 minutes of fame since his viral meltdown in the bagel shop, where he lost his cool over a number of things, including lady troubles. As we’ve noted, he’s had a long history of public confrontations and face-offs with folks. The Bagel Boss is set to box Lenny Dykstra in a Celebrity Boxing match in Atlantic City.