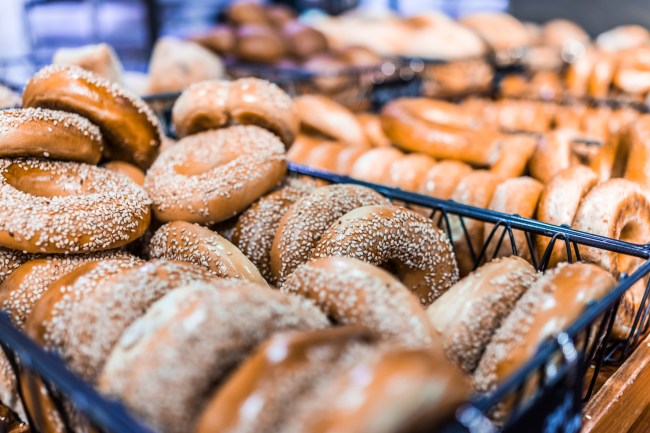 After nearly two years and countless rejection, it appears that Chris Morgan, aka Bagel Boss, has found his match.

Stephanie Denaro may now forever be know as Bagel Karen after the 38-year-old called a New York City bakery worker the n-word after being refused service for not wearing a mask. A deplorable act on its own, made only more confounding when you consider she’s in the presence of her four mixed race children.

The New York Post tracked down Denaro, who reportedly attended New York University and has two poetry books for sale on Amazon, after the video was viewed millions of times, and the Lower East Side resident attempted to convince us that our ears are malfunctioning.

Calling on @amazon to remove Stephanie Denaro's book. She is a white supremacist caught on video yelling the N word to a barista. Remove her book pic.twitter.com/ZH4hsSbXDO

“I didn’t call him the N-word,” she said. “I called him a term to describe his behavior.”

She added: “Listen, there are different ways to spell things. I called him a specific word.”

It’s since been revealed that this isn’t Bagel Karen’s first run-in with a cell phone camera, as she has been a staunch COVID denier and a MAGA-touting mainstay on the streets of New York.

Bagel #karen back at it pic.twitter.com/kKLjrJdgal

This is the woman caught on camera calling that Black man at the Davidovich Bakery the N word in New York. Her name is Stephanie Denaro. Her children are biracial. Now read the caption. This is not shocking or surprising. Y'all be fetishizing KkKarens and this is the end result. pic.twitter.com/8bgJIazNkj

If there’s a silver lining in this mess, it’s that the outpouring of support for Vic, the 30-year-old bakery worker, has been tangible both online and in person.

He says during his Wednesday shift, one guy handed him a $100 bill in an envelope while another gifted him a $100 Metro card to help with his commute. Vic tells us his tip jar’s also been stuffed … and people have been calling the bakery to ask for his Venmo as well.

Vic said he was “disappointed” over Denaro’s comments and “sad” her children had to witness it.

Still, he added, “I’m very calm about it and I pray for her.”

“I hope for the world to become a better world,” Victor continued. “We went through four years before that of division, of building walls, so I felt like we came into this new year … it was going to be a new era or a new way of thinking, a mindset for everybody, but [there] are still people out that still act with racism, with hate, so I just want everybody to act with love more than hatred.” [via New York Post]

Let’s hope Stephanie finds the help she so desperately needs, if not for her, for her four children.