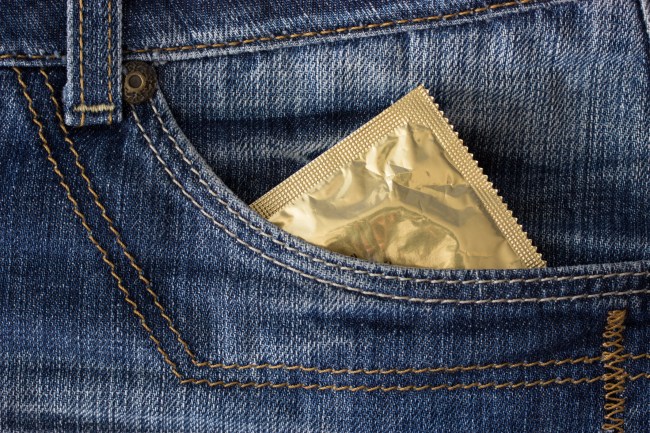 Using condoms to practice safe sex? A great idea. Cuts down on unwanted pregnancy, the spread of STDs, etc. Stapling holes in condoms? A terrible idea.

A barber has gone viral after a picture emerged showing his business card stapled to a condom. The first reaction many people have had is ‘what the fuuuuuuck is wrong with this guy?!’ but here me out, it’s possible that Jack Gamez at the Texas-based Fadeaway Barbershop is a bonafide genius.

The Internet actually seems to be torn on whether or not this guy is a complete bonehead or if he’s playing the elaborate long con to create future generations of customers. After piercing holes in condoms, his customers go home and have babies. Those babies grow up and need haircuts and Boom! Goes the dynamite, his customer base is growing exponentially.

It all started with a tweet from Jack Gamez himself:

Gotta include one of these with every card! You’re going to need it after I cut your hair 💈🥇Trust me 🙌🏼 pic.twitter.com/V8XEusCgoe

The initial reactions called him out for stupidity, but that’s too obvious is it not?

Who gone tell him… pic.twitter.com/ICypB2D14f

You put holes through the condom Jake. https://t.co/yrkLue1s3w

how you gonna staple pacifiers next year https://t.co/J2hfA9jiwo

Things quickly turned to people joking that this is the best way to get new clients. Jack Gamez himself started retweeting these responses. It’s still unclear if he’s doing this to save face, if it was all meant to be a joke to begin with, or if this dude is really that damn stupid.

Homie put a staple in the condom so he could give his client’s future son a fade too. I fuck with the vision https://t.co/VhU4M56dMI

You out here with a vision of creating generational wealth….. great business plan

lmao everyone commenting about him trying to get them to have kids so he can cut the kids hair but he’s giving out condoms so that don’t even make sense. https://t.co/j3OP8lVd9H

This man ain’t dumb, he’s gonna be cutting their kids hair too and doubling his profits https://t.co/JVbqwznVil

This is an actual brilliant ad 😂 https://t.co/nFAtKDHdiw

This marketing gimmick has a hole in it. https://t.co/LMikMYrfT7

What do you bros think? This could’ve gone a few different ways. There’s NO POSSIBLE WAY he could’ve planned on going viral but he could’ve stapled the condom as a joke to get some laughs on Twitter.

Sometimes the answer isn’t a riddle wrapped in an enigma, he could be that dumb and have stapled the condom without realizing what he was doing and he’s now trying to play it off as some hilarious viral marketing scheme.

I’m going with the latter, but not that he’s that dumb, I’ll give him the benefit of the doubt and assume he’d had some drinks or smoked a blunt beforehand.