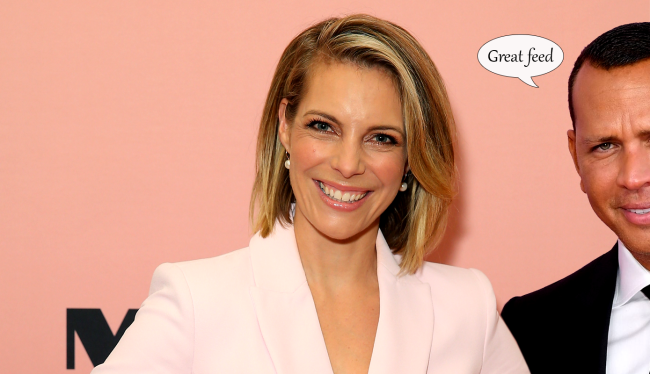 Heads up, ladies, Alex Rodriguez is back on the prowl. We know this because on Friday Australian television host Belinda Russell revealed on her show, Today Extra, that Rodriguez recently slipped into her DMs to compliment her.

A-Rod is once again loose out in the wild thanks to Jennifer Lopez reportedly making it crystal clear that there is zero shot of her getting back together with him. (Even if she is still showing off the $1.8 million engagement ring her gave her, and is apparently not returning.)

Belinda Russell, 42, said on the show that Rodriguez, 45, reached out to her via direct message on Instagram to praise her “great feed” after she posted a video of herself dancing in the Channel Nine studio.

“You’ve had somewhat of a celebrity encounter,” Russell’s co-host Richard Wilkins said to get the story rolling. “An A-list star has slid into your direct messages on what… Instagram?”

“I woke up this morning, checking the socials and in my requests there was a message from Alex Rodriguez,” replied Russell. “As in A-Rod. As in J.Lo’s ex.”

“All I can say is… he likes great content, Dickie. He just said great feed!” she told Wilkins.

She then added, “If you count [there’s] four million followers. Give me a shout-out, A-Rod, and get me some followers!”

Wilkins, naturally, asked Russell if she thought Rodriguez was hitting on her.