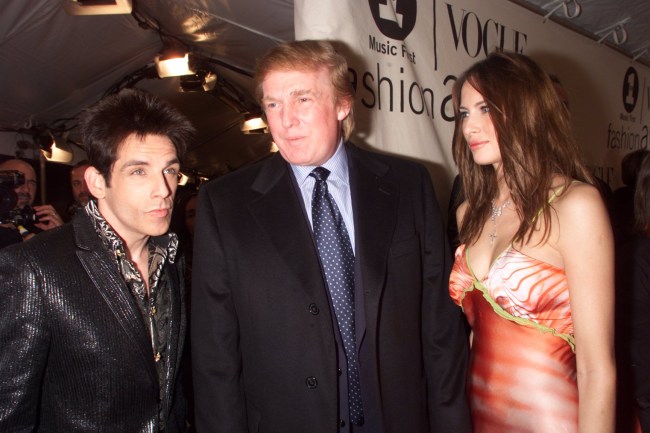 “Without Derek Zoolander, male modeling wouldn’t be what it is today.”

This is the extent of Donald Trump’s cameo in the 2001 comedy sensation Zoolander.

Trump, then just a spry 55-year-old, was on the heels of his first presidential campaign in 2000 in which he dropped out after prelim polls indicated he had just seven percent of voter support. He was still a full two years before The Apprentice brought him into every living room in America, and he would not propose to the woman featured in the clip below for another three years.

Zoolander star and director Ben Stiller told the Daily Beast podcast The New Abnormal how the then B-list celebrity entrepreneur became part of the production.

“We were shooting at the now defunct VH1 Fashion Awards…and as people were coming up the red carpet, we pulled them aside and asked them to talk about Derek Zoolander, and so Trump and Melania did that,” Stiller told the podcast.

Stiller added: “I’ve had people reach out to me and say, ‘You should edit Donald Trump out of Zoolander,’ but at the end of the day that was a time that existed and that happened.”

Trump’s IMDb page is sneaky meaty, securing 27 acting credits to his name with works such as Zoolander, Home Alone 2: Lost in New York, Two Weeks Notice, The Fresh Prince of Bel-Air, Sex and the City, Suddenly Susan, WrestleMania 23, and yes, even The Little Rascals.

Friendly reminder that Donald Trump is the awful rich kid's dad in The Little Rascals pic.twitter.com/8QmRnF3B2T

In 2017, Matt Damon described the very Trumpian way the Donald would slither into our televisions.

Speaking to The Hollywood Reporter, Matt Damon revealed that whenever film productions requested to film in one of this buildings, Trump, the egomaniac, would insist that a part was written for him in the movie.

“[Director] Martin Brest had to write something in Scent of a Woman – and the whole crew was in on it,” Damon explained: “You have to waste an hour of your day with a bullshit shot: Donald Trump walks in and Al Pacino’s like, “Hello, Mr. Trump!” – you had to call him by name – and then he exits.”

“You waste a little time so that you can get the permit, and then you can cut the scene out. But I guess in Home Alone 2 they left it in.” [via NME]