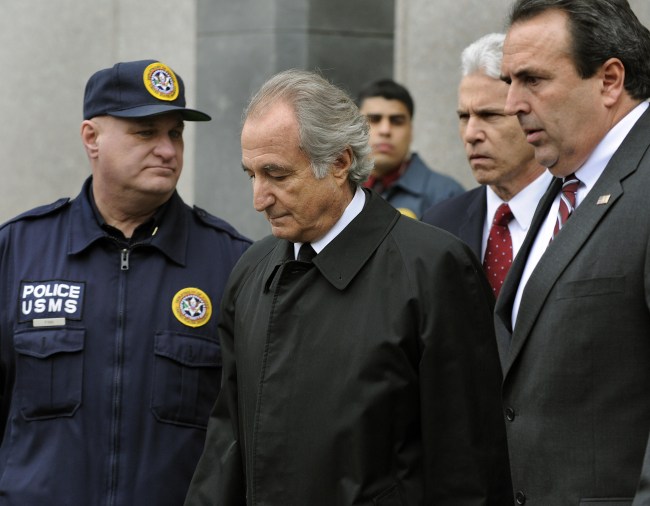 Bernie Madoff is apparently sick and tired of having to worry about dropping the soap in federal prison. According to the Washington Post Madoff requested that Uncle Sam let him out of the pen for his, albeit, probably pretty limited, remaining year(s).

You see, the man behind the largest ($60B) Ponzi scheme in US history is allegedly (read: according to his lawyers) terminally ill. Bernard claims that “kidney disease” leaves him with less than 18 months to live. Months that he’d like to spend in the comfort of his own home and not having to worry about unwanted prison shower sex.

Apparently, Bernie has never seen Shawshank Redemption or he’d know that white-haired, geriatric prisoners have a hard time adjusting to the outside world. Amirite Brooks?

Madoff pleaded his case to the people’s court (no, not that People’s Court):

“There’s no cure for my type of disease. So, you know, I’ve served. I’ve served 11 years already, and, quite frankly, I’ve suffered through it.” [Editors note: Madoff was sentenced to 150 years in prison for his decades-long scheme.]

So by my calculations *carries the two, gets frustrated … pulls out TI-83* Bern has served roughly 7% of his entire sentence. Or approximately the same percentage of shits his victims give about his “health issues.”

But you can’t knock him for trying. For f*cks sake, it worked for another Bernie. Bernard Ebbers, the infamous CEO behind the largest accounting scandal in US history, Worldcom, was released early from prison (and died soon after) after seeking release on the grounds of compassion. So you’re telling me there’s a chance?!

And just in case someone inside the Federal Penitentiary system is thinking about taking it easy on Bernie, I’ll just leave this right here: Sex Worker Killed After Paroled Murderer Allowed to Satisfy ‘Sexual Needs’.

But wait, there’s more where that came from. The article above was written by The Water Coolest’s editorial team. The Water Coolest is a daily business news and professional advice email newsletter … with a hearty helping of unfiltered commentary (see above).